The Quest for The Best: Andrew Luck vs. Peyton Manning 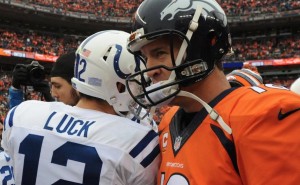 Andrew Luck and Peyton Manning faced off when the Colts played the Broncos Jan. 11 in the divisional round of the NFL playoffs. Photo: Indianapolis Colts

Yes, Peyton Manning has a Super Bowl ring, consistent playoff wins, 530 touchdown passes, an average QB rating of 97.5 and a golden reputation. It is completely fair to say that he is the best QB (at least of the past decade) to roam the rugged turf of the NFL. Manning has accrued these stats throughout a long career in which his consistency is unmatched. This isn’t to say, however, that Peyton Manning is invincible. Like any other athlete, he has bad days; not to mention he is now 38 years old and has also been through multiple surgeries. Despite being one of the older players in the NFL, he is still performing at the highest level and hardly shows any signs of slowing down. However, more new school quarterbacks are beginning to nip at his heels and question his authority.

Andrew Luck, who won two conference Offensive Player of the Year awards, graduated from Stanford University and finished second in the Heisman voting twice, is now settling into his third year in the NFL. He has taken the league by storm since his rookie year, and is currently competing for a spot in the Super Bowl. He proved his dominance early on by recording maybe the best rookie season ever, for he set the record of most rookie passing yards in a game (433) and in a season (4,374). Andrew Luck, in fact, has put up eerily similar statistics and accomplishments as the great Peyton Manning.

Both of these stellar icons met head-to-head on Jan. 11, 2015 in the divisional round of the playoffs. The Colts upset the Broncos 24-13 in an intense dual at Sports Authority Field at Mile High. “It takes the great ones to beat the great ones” said Colts wide receiver T.Y. Hilton, referring to Andrew Luck. Colts offensive star Reggie Wayne continued this idea, “[He] keeps a calm posture all the time. No matter what the situation, no matter how bad we’re behind the eight ball, he still goes out there and keeps everybody under control.”

Pace students and faculty had some opinions on the comparison of these two elite quarterbacks as well. The esteemed fantasy football player and Ancient History teacher Ms. Stevens viewed Andrew Luck as, “the next Peyton Manning. They are very similar except Andrew Luck is more athletic, and [Andrew Luck] has a lot of the same mental game.” Ms. Barbakow quietly admitted, “He’s cute when he shaves,” and sophomore Josh Simons claimed that “He will be an elite QB… he’s already an elite QB.” Panthers fanatic Bailey Player said, “The supreme level of equanimity Andrew Luck brings to the game and surgery he performs on the field is just so confident.” But junior Anthony Trinh put forth another side to the argument, declaring that “Peyton is a technician, and it’s impressive that he’s still elite.”

There is a certain irony in this argument, that occurred when Luck took Manning’s position after Manning endured what was supposed to be a career ending neck surgery. The Colts organization let Manning go in what was an emotional decision, quickly picking up Luck as his replacement. Overall, the Colts made the winning decision by drafting Luck as the first overall pick in 2012. Andrew Luck has taken them to the playoffs three years straight, and the Colts have locked in a face for their franchise’s future. The future is still unclear, but it is certain that Andrew Luck will be an elite quarterback for years to come and a tough rival to Manning’s prestige.