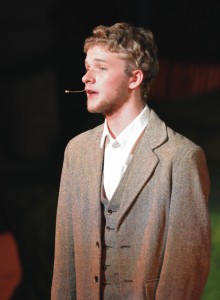 As the year slowly begins to wind down, most seniors are looking ahead to what the future may hold. A few of those seniors aim to pursue a career in the arts, something that only a handful of Pace students attempt each year.

Pace’s esteemed theatre program is headed by Dr. Mengert, who has helped build one of the strongest performing arts programs in Georgia since 1971. According to highly credible sources (Pace faculty, students and alumni), Pace productions bring the heat and pack a fiery punch of “amazingness” to the audience.  This year, nine talented seniors performed in the Pace fall musical “Into the Woods.”

Most of these seniors will continue their path to adulthood through a typical college experience, but some will continue mastering the arts. “I’d like to work in the film industry, so I’m applying to schools with the intended major of Film Production, or Screenwriting or Film Critical Studies,” said senior Cooper Peery. “I haven’t made any decisions yet, but I’d really like to go to a school in California.”

Seniors Caillin Cooke and Rebecca Husk plan to pursue performing arts in college. “I hope to perform as a career. I love performing on the stage,” said Caillin. Applying to performing arts programs at the college level is no easy task as students first have to audition. Then they have to apply to each college once they’ve been deemed good enough for the theatre program, and wait for their acceptance. “The only two schools I’m auditioning for are NYU and Carnegie Mellon. Both have incredible theatre programs,” said Rebecca. “This past summer, I actually spent a month in New York taking musical theatre classes at NYU’s Tisch School of the Arts.”

Pace alumni currently performing in college commend Pace for helping them prepare for the long hours and strenuous rehearsals. Cory Bush ’14 and Sam Downey ’14 both attend NYU’s Tisch School. “The long rehearsal hours at Pace prepared me well for the long studio days. Also, just being on stage and performing constantly got me used to performing in front of people and being confident in the work that I’m doing,” said Cory “I would love to pursue a career on Broadway in New York but I’m open to other performing opportunities in other cities.” Sam also wants to pursue a career in acting. “I have time for friends, but the hours are long and many nights are spent rehearsing,” he said.