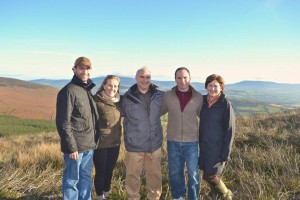 Many students remember Mr. Anthony from sixth grade history, but few know about his recent sabbatical. Mr. Anthony caught on to the new trend of studying abroad (with the number of students participating in Global Ed trips rapidly increasing), and took his talents across the pond to Trinity College in Dublin, Ireland. He stayed there for a year (from September 2013 to September 2014) to study European history during the time of the Reformation. Of all that Ireland had to offer, the aspect he enjoyed the most was the culture. “Everyone’s in a good mood all the time,” said Mr. Anthony.

One of his favorite memories from the year abroad was an experience in a park with his friend François. According to Mr. Anthony, he and his new friend were sitting on a bench just minding their own business, when two nice ladies walked up to them and simply started a conversation. They talked for 10 minutes and then left with a friendly goodbye. Twenty minutes later, two large men walked up Mr. Anthony and François, and said, “We heard you’re good for a conversation. Mind if we chat?” This was a pleasant surprise for Mr. Anthony, who said that “people don’t need a reason to talk to each other, they just do [it].”

Apart from affable conversation, names are another thing that struck Mr. Anthony about Ireland. While Ireland primarily speaks English, there is also a more traditional Celtic version of the language that has resulted in some rather interesting names. For example, Mr. Anthony’s first name is “Graham,” but in Ireland it’s spelled “Graeme.” The Celtic language includes some puzzling expressions to an English speaker. Mr. Anthony recalls his favorite Irish expression, “Good Craic?” as causing him the most confusion. In Ireland, “Good craic?” is equivalent to “Was it good?” in America. But Mr. Anthony wasn’t informed of this before he arrived, so the first time he was asked if something had “good craic,” he was muddled until the phrase was finally explained to him.

While his primary objective in Ireland was to take classes, one of the most important things he gained from his trip, he learned from the people. Ireland is known for being predominantly Catholic, but Dublin is in a subdivision of Ireland called The Pale, which is a predominantly Protestant region because it is closest to England. This proved to have an interesting demographic, mostly because there is some serious tension between Catholics and Protestants in Ireland (due to a storied past of religious conflict). This was most notable, surprisingly, in sports. The Protestants play more traditional European sports such as rugby and soccer, whereas Catholics play less well-known sports such as hurling (similar to lacrosse, but more violent).

When asked what he missed about America, Mr. Anthony simply said, “the little things.” For example, the school Mr. Anthony attended in Dublin was roughly the same size as the new Arthur M. Blank Family Upper School, but where our school has a bathroom on each floor, the school in Dublin had but one bathroom on the bottom floor. Needless to say, this required some planning ahead when taking a class on the top floor.

Another difference was the lack of convenience stores. Americans take stores like ACE Hardware and Home Depot for granted, because if you want something in Ireland, you have to go to that specific store. Need a light bulb? You won’t find one at the grocery store or the pharmacy. You’ll need to go to the light bulb store. While this is significantly less convenient, Mr. Anthony said he didn’t mind the more traditional practices because they made him more aware of what he (and most Americans) take for granted on a daily basis.