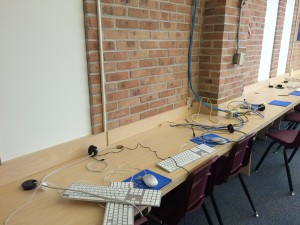 The lower school computer lab sits in ruin after the theft of all of its iMacs.  Photo: Dean Papastrat

At approximately 11:30 p.m. on Dec. 10, several thieves broke into the Pace Academy Lower School and proceeded to steal over 60 Apple computers from technology labs, laptop carts and other areas. Security camera tapes revealed that several of the crooks were wearing ski masks and broke in through a weak side door. The footage should provide useful evidence to law officers. Early reports indicate this theft may be related to crimes that have occurred at other Atlanta schools recently, with mass technology theft.

The Atlanta Police Department responded to the crime this morning and began their investigation. The technology labs and library were closed while police were on the scene, causing Lower School students to become worried. Students asked why the men came or if they would come back, trying to reason out why people would possibly want to steal from their school. Teachers struggled to explain the nature of the attack, continually repeating: “they came for the materials, not people.” Lower school computer teacher Ms. Brown expressed similar sentiments; while she was concerned about the loss of the technology, she was glad the incident didn’t occur while students were at school.

Despite the incident being isolated to just the Lower School, opinions about the crime were expressed all around campus. “I’m outraged,” said senior Rebecca Husk. “There are some things you just don’t mess with – the Lower School is one of those things.” Diversity Director Mr. Holifield condemned the theft, but echoed a similar mantra to many other administrators: “I’m glad it was objects, and not people. We can replace objects, but we can’t replace people.”