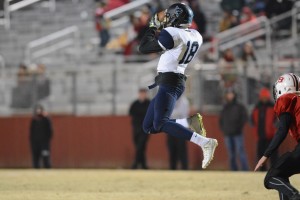 Junior wide receiver Spencer Hemmingway hauls in a pass against the Bowdon Red Devils in the first round of the GHSA State Playoffs. Photo: Fred Assaf

If last week’s win over B.E.S.T. Academy was a nail-biter, this week’s win over Bowdon High to advance to the second round of the GHSA State Playoffs was anything but for the Pace Academy Knights. Pace dominated the second half, scoring four unanswered touchdowns to run away from the Red Devils, winning 49-28 at Bowdon.

The Knights scored with 35 seconds left in the first half, but senior running back Darnell Holland, who scored four touchdowns and ran for 231 yards, scooped up a pooch kickoff and took it 73 yards for the game-tying score. All signs pointed to the game turning into a knockdown, drag-out playoff classic in the second half. However, Pace had other ideas. After holding Bowdon to a 3-and-out to start the second half, senior quarterback Kevin Johnson led the offense on a remarkable string of offensive possessions.

A trick play led to sophomore running back/wide receiver Deon Jackson throwing his first career touchdown pass, to senior Trevor Cefalu, who sat wide open in the end zone. Kev then hit senior Noah Brooker for a 44-yard touchdown on the first play of the next possession before he took the third touchdown of the half up the middle himself for 6.

Kevin accounted for five touchdowns in total, including four in the air and one on the ground. After the rushing touchdown, the Bowdon crowd seemed to know that the game was all but over, while the Pace fans who traveled the 71 miles from Atlanta to Bowdon went berserk just across the field. The win was capped off by a dazzling 44-yard interception return for a touchdown by junior Mick Assaf.

The win was the first in Pace history, as it was only their second ever playoff appearance. The defense played spectacularly in the second half for the second straight game, as the only points they allowed in the second half were from a garbage time touchdown. The wide receiving core also had a huge game, as Noah and Trevor, along with Deon and junior Spencer Hemmingway, caught virtually every ball thrown their way. A sign hanging in the Bowdon end zone before the game said, “TELL Y’ALLS’ GIRLFRIENDS Y’ALL WILL BE FREE NEXT FRIDAY NIGHT.” After the victory, the victorious Pace squad rushed over to the sign, taking pictures with it before heading into the locker room.

Even if Pace advances no further in the state playoffs, this victory will be remembered as a watershed moment in Pace football history. But Pace will try to continue the journey next week, as they travel to Louisville, Georgia to take on Jefferson County.