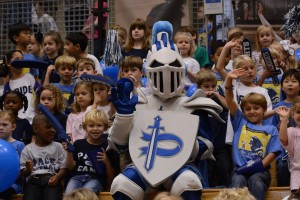 Can you spot the Pace Knight at the Pep Rally? Photo: Fred Assaf

You see the mascot at every sporting event. He hangs out with all the cheerleaders and is friends with every lower schooler at Pace Academy. “The little kids love the Knight,” said Headmaster Mr. Assaf. “It’s the most asked question: ‘Who is the Knight?'” Truly a celebrity on the Pace campus, the mascot is known by all, but how well do you really know the Pace Academy Knight? Everyone has a story, including the new knight mascot.

The costume itself was designed by the company that does most all of the college mascot costumes. It was supposed to be ready for the opening of Walsh Field, but there was a mishap and the company couldn’t get it to Pace in time. “However, they’ve been really super nice to us and they’re going to clean it forever and take care of our knight,” said Mr. Assaf.

There are three spirited students inside the costume who are responsible for getting the fans pumped up during games. Senior Caroline Denny usually transforms into the Knight during the second half of games, ready to take on the challenge of either continuing the hype or amplifying it. Caroline decided to don the ensemble after hearing there was a new costume. “I’m a senior and I love Pace, so I thought it would be a really fun thing to do,” said Caroline. “Plus, the old costume was a little scary, so this one is really fun.” Although it is “like an oven” inside the costume, she wants to continue being the Knight, hoping to help out at basketball games as well. “The best part is all the younger kids’ reactions to seeing the Knight,” she said. “They get so excited.”

Sophomore Libby Sams chose to be the mascot for an entirely different reason. “It sounded really fun and the sleep-in days are awesome,” said Libby.  To reward them for their performances at the games, the mascots are given the privilege of choosing an 80-minute period to sleep-in for every game they work. While the added perks are nice, Libby’s favorite part about wearing the costume is that “usually people assume it’s Parkes Tesler in the costume, so I can do anything I want and they will never know it was me.” Surprisingly, the costume isn’t hard to move around in, but there are some complications if you’re not very tall. “I always forget how much bigger the limbs are, so I run into a lot of things,” said Libby.

It was an impulse decision for junior Parkes Tesler to don the mascot costume. Most often seen at the beginning of the games, Parkes loves being the mascot because “the little kids smile when they see [him].” However, as fun as being the mascot is, it isn’t an easy job. “Stepping into the costume is like stepping into ‘H-E-double-hockey-sticks’ itself,'” said Parkes, referring to how hot the costume can get while one is moving around so much.