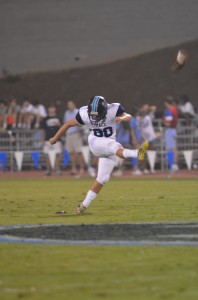 Knights’ kicking ace Samuel Sloman has been a positive addition to the squad. Here, he kicks off against the Lovett Lions. Photo: Fred Assaf

There comes a time during every Pace Academy football game where everything comes to a halt. The ruckus occurring on the field, the disputes being held on the sidelines, and the never-ending conversations in the bleachers all freeze in anticipation of a critical play. Head Coach Chris Slade calls on the 5’8″, 170 lb. junior who emerges from his special teams shell and saves the day for the Knights. He (actually, his leg) is the ultimate secret weapon. He is Samuel Sloman.

“I guess you could say I’m a boss,” Samuel said with a smile.

Samuel is definitely enjoying his spot in the limelight as the Knights’ all star kicker/punter. He has made seven out of ten field goals this season, and has a 100% extra point percentage. However, it’s not just the strong leg that feeds the fascinating enigma that is Samuel Sloman. The Roswell native grew up on the same field, yet between different lines than that of the gridiron. “I have been playing soccer since I was little,” he said. “I have played for the Knights’ soccer teams and athletic club teams outside of Pace.” His position is goalie. Despite being considerably shorter than the average height of a college goalkeeper, Samuel has achieved success at the position that is dominated by the giants of soccer. “It’s all about heart and determination,” he said.

To have the courage to walk onto an unfamiliar field, put on a uniform that one has never worn, and play a completely new sport, takes a ton of heart and determination. After being persuaded by many in the community, especially Coach Slade, Samuel suited up in #80 for the Navy and White. “I never thought I had time for it in the past,” Samuel recalled. “I came to the first practice open-minded. I really wanted to start a new chapter in my athletic career.”

He has had the benefit of being personally tutored by noted kicking guru Cedric Oglesby. One of the Knights’ special teams coordinators, Coach Oglesby was a place kicker for the Bulldogs of South Carolina State University and the NFL’s Arizona Cardinals. “He’s really been a key factor in my development,” Samuel said. “He and the other coaches feel that I have a chance to play college football. Right now, I just have potential and I need to develop. I know I can be good.”

When he’s not developing his potential, Samuel enjoys eating Chick-fil-A and watching movies, including his personal favorite, “Remember the Titans.” He also loves fishing and hanging out with friends. But most of all, Samuel loves all things affiliated with the University of Georgia Bulldogs. When asked about the possibility of being a kicker for the ‘Dawgs, he said with a smile, “That would be the most ideal situation. It would be the opportunity of a lifetime and a dream come true.” Look for Samuel to make big waves as a place kicker in the future as he continues to boot the Knights to success.