Shake Shack Fails to Live Up to Hype 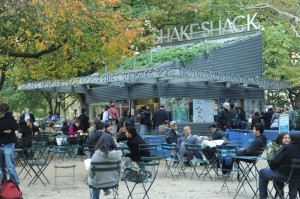 Beginning with a hot dog cart located in Madison Square Garden, Manhattan, Shake Shack has since grown to become one of the most famous burger joints in the United States. The restaurant was established in 2000 by Danny Meyer’s Union Square Hospitality Group to help support Madison Square Park Conservancy’s art installation. The small stand was an immediate hit, and four years later, earned itself a bid to become a full-time kiosk in the park. Ten years later, the Shake Shack now has stores in eight states in the U.S. and eight different countries including Russia, Qatar and England.  Globalization of the brand has helped the restaurant grow into a nationwide and worldwide name. The “Shack” has earned a multitude of awards such as “Travel and Leisure’s Best Hot Dog in America,” and famous food critic Andrew Zimmerman’s “Best Burger in the U.S.” Not only is the food nationally recognized, but Shake Shack is known for an atmosphere that few other burger and hot dog joints can successfully compete against.

A week ago, I visited the recently opened Shake Shack in Buckhead along Peachtree Road. The new restaurant fits perfectly in its location due to all of the new retail and restaurants opening around it. Only open since Sept. 30, the Shack has been extremely popular, almost always having a line of customers that is out the doors and down the street. Although intimidating, the block-long line moved rather quickly and I was able to order in roughly 25-30 minutes. Shake Shack helps the line seem shorter by providing quick snacks of featured items on the menu.

Inside, the decor is very modern and spare with large windows and white marble tables. The menu doesn’t have a wide variety of options, with only five burgers and four hot dogs offered. In addition to the burgers and hotdogs, the choices are cheese fries or regular fries with your meal. The best part of the menu, and certainly the most elaborate, is the frozen custard section. These delicious desserts are served in a multitude of ways with a plethora of toppings and mix-ins. For my meal, I tried the traditional Shack burger served with fries, a black and white milkshake, grape lemonade and The Concrete Jungle.

Although the Shack is famous for its burgers, I didn’t think that the burgers lived up to their hype. They didn’t have much flavor nor were the beef patties juicy. The shake wasn’t great either. It was neither super cold nor did it have a lot of flavor. However, the lemonade, Concrete and fries were all fantastic. The crinkle cut fries cooked to perfection, and seasoned with the right amount of salt, give customers a yummy side option. The Concrete, a frozen custard-ice cream blended at high speed, allows one to get creative with all of the mix-ins and flavors available. This tasty treat alone gives me reason to return to the Shake Shack for more. Although I didn’t love the Shack, I would highly recommend going to the restaurant for the unique atmosphere that it provides for customers.