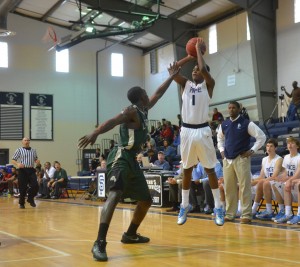 Wake up, work out, go to school, work out some more, sleep, repeat. This is the lifestyle of the Pace basketball players who are working hard to make their first season in the AA classification their best season ever. Every day, the athletes work tirelessly with their conditioning, weight training and skills workouts. Head Coach Demetrius Smith has put a new emphasis on preseason training, and the team is poised to make an immense leap this year. This year’s team is led by seniors Elijah Holifield, Elijah Sheft and Waide Swain. Other impact players include juniors Zack Kaminsky and Jordan Harris, along with sophomore Wendell Carter, who is a new member of the team with his eligibility issues now resolved.

The focus of the team this year will be to play in transition and try to attack the basket, rather than run set plays in a half-court offense. The Knights are able to run this sort of offense because of the athleticism at every position on the floor. However, defense is the Knights’ main priority. “I think the most important aspect of our team is our culture,” said Elijah. “Last year, we didn’t have a winning attitude for long periods of time during the course of the season, and winning starts with your mentality.” The Knights will be a very entertaining team this year, as their combination of athleticism and fast-paced play will be worth the price of admission.

The Knights face a major challenge in playing their first season in the AA classification this year. With other tough teams in the region such as Greater Atlanta Christian and rival Holy Innocents’, the Knights will be fighting hard to win the region and to make the state playoffs. However, this Pace team has the ability to employ different lineups in the middle of games that vary in size and speed, which can surprise opponents and give the Knights the advantage in tight games. Along with their athleticism, the basketball squad also has a medley of shooters who can spread out the defense and allow for drives to the paint. The Knights’ offense this year appears to be potent and the defense will be as intense as ever, pointing to a good shot at future success.