Every Monday morning, students pack into the Inman Center conference room to make plans to improve eco-friendliness in the Pace community. Club president and senior Sarah Lettes leads the Green Team in initiatives around the school, including the recent “Take Me Outside Day,” which encouraged students to spend time outside and ignore electronics for a day. Among other recent efforts, the most notable change is the addition of compost bins in the cafeteria. Instead of throwing away partially eaten food, students dump their unwanted refuse into these bins which then decomposes and turns into fertilizer. This helps decrease the amount of trash the Pace community produces and provides a way to recycle the food that we don’t eat. 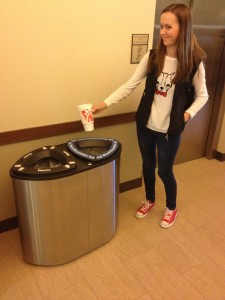 Meetings consist of identifying ideas for future projects as well as videos to raise awareness about being eco-friendly. Two videos have already been created by the Green Team, with the second slated to be shown in assembly very soon. The first, created by sophomore Landon Goldstein, focused on the importance of using the compost bins in the cafeteria. The second video, starring junior Carlee Pokalsky, focuses on recycling in the Upper School.

A new video called “American Idle,” created by sophomores Eno Reyes and Rob Warren, is in the works and will focus on car idling in the Pace carpool line and how to prevent it. Future plans also include a competition for creating the labels for the recycling bins.

As Sarah approaches graduation, the daunting task of appointing a successor looms over her. “As of right now, the race of leadership is anyone’s game,” she said. “The front-runners, juniors Tory Dancu and Jake Jenkins, are two core leaders in the organization right now, and I think that both would be great leaders. Another possibility would be to keep power hereditary and pass the torch to my brother [sophomore] Sammy Lettes, but I think the power would go to his head.”

With over 50 members, the Green Team has experienced a meteoric rise in interest and involvement, and likely will remain sustainable next year without the one and only Sarah Lettes leading the charge.