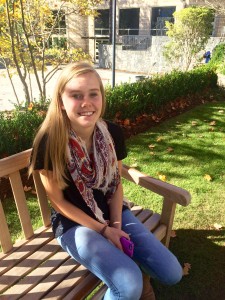 Carson Myers is an amazing singer and a Pace lifer .
Photo: Dean Papastrat

KN: So Carson, what’s your favorite thing to do at the Academy?

CM: I really like music and enjoy singing. I think people probably know that about me, but, yeah. Singing. I’m also on the Green Team.

KN: Any songs you really like to sing these days?

CM: I love Sara Bareilles! I love playing her songs on piano, how she sings, and her voice in general.

KN: Will you be at Cabaret this year?

KN: What do you think of Pace chorus?

KN: Are you in the Pace fall musical?

CM: Yes! I’m actually Cinderella’s stepmother. It’s been a challenge for me since I’m not used to playing such a mean character. I also have to yell at [senior] Caillin Cooke a lot, which is so hard because she’s so nice.

KN: Cool! How many Pace shows have you been involved in?

CM: Three in Middle School, and this is my second upper school production.

KN: Have you ever had anything funny happen during a show?

CM: So, in “Canned Hamlet,” someone forgot to ring a bell. [Juniors] Brendan Pace and Jared Goldman had to improvise for over three minutes, and it was hilarious. They started talking about space aliens.

KN: Changing gears, how long have you been at Pace?

KN: So, which transition was harder: freshman to sophomore, or Middle School to freshman?

CM: Definitely freshman to sophomore. Freshman year was much easier than sophomore year, and they ease you into the Upper School. I know that sounds weird, but it’s true.

KN: You said you were on the Green Team. Can you give us the inside scoop on what they’re up to?

CM: We’re making this little compost garden, and it should be a really nice addition to the composting program.

KN: Now for a hard-hitting question. What’s your stance on the Shooting Club?

CM: Oh gosh, I don’t know! I haven’t really thought about that. (looks away)

KN: Thanks so much for talking with us. Have a good day Carson!