Player? I Hardly Know Him!

Most every Pace student is aware of Mr. Player’s exquisite English expertise and dapper apparel, but few know of his fascinating background. Having grown up in Georgia, Mr. Player attended The Westminster Schools. He earned his Bachelor’s degree at Furman University and his Master’s in American Literature from Florida State University. Throughout his life, Mr. Player has been a musician. He is a talented guitarist, pianist and bass player, and describes himself as having dabbled in drums. “I have a very serious interest in music,” he said. “It is really always on for me in some regard. I play it when I’m driving, I play it when I cook, and I have always imagined it as sort of a soundtrack to my life.”

Mr. Player shares this love of music every day with his students. “I always play music when kids walk into the classroom,” he said. “Part of that is a pedagogical tool. I read a book that described students as needing a palate cleanser. I use it as a subconscious signal for you guys. This way you get this sense that, ‘Oh, I’m in English class now,’ and you sort of decompress whatever you had last in your mind.”

Mr. Player also assists his wife with her writing by creating specific playlists for her. “As somebody who she confides in with her ideas, I actually make these mixes for her as she’s writing,” said Mr. Player. “So she sort of gives me the plot of the story, and as I start reading these very early versions of her drafts, I’ll make these mixes and she’ll continue to write under the music I provide, and hopefully it will inspire her… And then at the end I’ll compile them into multiple mixes while she’s revising, so she’ll get maybe five or six mixes over the course of her writing the book, and at the end, we’ll choose the best ones together and that will be what she edits to.” 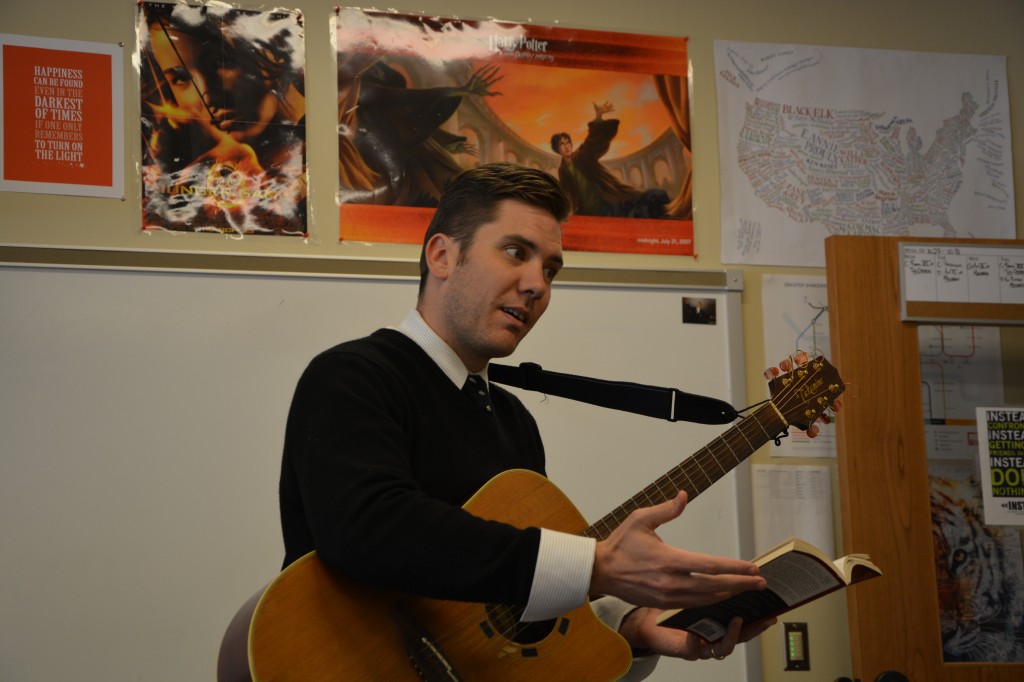 Mr. Player described his musical mixes as having an actual influence on his wife’s writing. “I ended up putting in a mix “Bold is Love” by Jimi Hendrix, and in that song he paints a picture of soldiers under all these different colored banners,” he said. “So she ended up creating an underlying color scheme within her novel as a result of that song. So it’s like these little clues and almost like little inside jokes we have within the novel.” He describes it as a “fun game” and claims, “It’s great for her to come to me and tell me ‘1920s,’ and so I have to ask, ‘Do I want songs from that time, or songs that are evocative of that story or even a little bit of both?’ Once she wrote [a] novel that was set in the Medieval era, which was quite challenging.”

Mr. Player has been composing his own music for almost 20 years. “I usually just do it for myself,” he said. “When I was in high school and college and then out of college, I was in a few different bands. I was in a band called Anderson Fall, which is just a terrible name for a band. But in graduate school, I was in a band called The Hip Replacements, which was like the greatest name for a band ever because we were all 25-year-old guys who would play at these college parties.” Mr. Player’s music can be found on SoundCloud.

Music is not the only indulgence in the Player household. Mr. and Mrs. Player are actually fairly accomplished cooks. “She cooks a lot of homespun recipes like casseroles and meatloaf,” said Mr. Player, referring to his wife. “She does a lot of improv cooking, so we have all these ingredients and she’ll cull them together and make a stir fry or something like that. She’s a really good cook. I love to put on Sinatra and Dean Martin when I cook, so I cook a lot of Italian food as a result.”

The Players like to jam and hang out with their five pets as well. The Australian Shepherd mix is named Fred and is described as a “goof ball and just a really good boy.” The miniature Australian Shepherd mix is named Little Bit, or “Bitty,” and the Pit Bull mix is named Mimi and is described as “the elder statesman.” The two cats are Mazie and Kiki (who are up for adoption, by the way. Take a look outside Mr. Player’s room on the third floor if you are interested). Mr. Player’s passion for music, cooking and animals is unparalleled by most. Without a doubt, this Player’s got talent.