London Football Fans Pack Wembley, Hoping for a Team of Their Own

This infographic shows the time and effort involved with a team traveling to play in London.
Photo: Atlanta Falcons 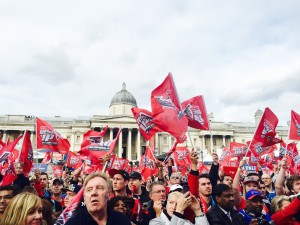 Fans in London show their support for the Falcons at the Fan Fest in Trafalgar Square
Photo: Josh Blank

As the NFL just completed its 10th game of the International Series in London on Oct. 26, the question of an NFL team moving to London seems to be a strong possibility. Since the series started in 2007, the number of games played in London have slowly expanded, as this season features three games across the pond.

With the increase in games, rumors have been rapidly circulating from major news sources such as FOX and ESPN that an NFL team could be established by 2020. Each game in London, packed with enthusiastic and interested fans, has averaged approximately 83,000 fans in attendance, with a record of 84,254 in a game in 2009 between the Tampa Bay Buccaneers and the New England Patriots.

These successful games, combined with fantastic turnouts, can only lead to one question: Is London ready to have their own NFL team? When upper school students were recently polled regarding this question, the responses were evenly divided. Seventy-five random students took the survey that asked whether they were in favor of, opposed to, or indifferent to London having a team. Of those 75 respondents, 26 students said they were opposed to the idea, while 25 said they were in favor. The remaining 24 students said that they were indifferent to the idea.

The process for the Falcons to send the team to play the Detroit Lions in London on Oct. 26 was very long and difficult. From Atlanta to London, the flight took approximately eight hours covering almost 4,300 miles. The team had to leave one week in advance to prepare their bodies physically and mentally for the time change and long travel. To set up for the Falcons, 500 pounds of equipment had to be shipped over in advance for the team, along with 26 catered meals per person. Fearing players could have a bad reaction to unfamiliar food in London,  the Falcons staff prepared “American” meals beforehand and sent them over to cover the entire trip for the team.

Besides the set-up, having so many staff members, players, and equipment items required a large number of moving parts. Five equipment trucks were deployed while 19 charter buses were used to help move the staff and players around London. During the stay, the team needed 340 rooms between two hotels – one close to the stadium, and the other near the Arsenal training facilities where the team practiced. This trip itself begs the question, are all of these moving parts worth it to have an NFL team in London?

Traveling would definitely be a problem, especially for West Coast teams, who would have to travel over 5,300 miles for one game. Not only would the travel be long, the time adjustment for West Coast teams would be very difficult week in and week out. “If a team moved to London, the travel costs and efforts would be ridiculous, which is why I’m not in favor of a team in London,” said senior Danny Kaplan.

Although the travel is a negative with having a team in London, there are plenty of positives. “I think it is a great idea and would bring something new to the NFL that has never been seen, which people want,” said sophomore Jack Rubenstein. “The only problem is that the overseas travel for the players every week could be too much.”

By having a team in London, the NFL would be in one of the largest European and world markets, which would help the globalization of the game. According to BBC Sport (BBC.com), the NFL games this season in London so far have brought in 32 million euros, while a team in London would bring in 102 million euros for the city. This economic impact by itself would be enough for some to justify a team moving to London.

“While I would love to see American football return to Europe, I’m concerned that travel and time changes would impact competitiveness,” said history teacher and Fantasy Football guru Ms. Stevens. “It’s hard to imagine that a team based in London, but playing half of its games around the US, wouldn’t be at a significant disadvantage. They might also struggle to attract free agents (although perhaps not more than Buffalo). That said, locating a franchise in London would certainly engage European interest in American football more effectively than NFL Europe did.”