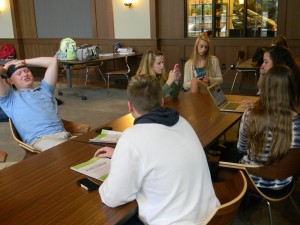 New building, new spaces. It seemed like in the old Upper School, most students spent their free periods in the Inman Center or library, and everyone knows about C6 and the appropriately named “Quad” from the trailers last year. But this year, where do most of the Upper School students spend their time during their frees?

In a student poll, some interesting trends arose. Of the 172 respondents, 52% of the student body spends their free time in the Woodruff Library, 21% in the Commons, 17% in the ARC, and 10% in the Inman Center. The survey, which contained an option for “Other,” also garnered responses such as the FAC Computer Lab, the Gardens, and “the bathroom.” One adventurous freshman traverses up Pace Mountain to the upper fields each day, while three upperclassmen enjoy alone time in their cars.

The results get more interesting when split by class. The freshman class uses the majority of their time in the library, yet spend a disproportionate amount of time in the Inman Center compared to other grades. The sophomores also visit the library during most of their frees, coming in at 73%. The juniors are the only class that does not spend the majority of their time in the Library, at 37% of the time, compared to 43% in the Commons. “The Commons is like my second home,” said junior Philip Markwalter. “Whenever I’m feeling down in the dumps, I come in here and play with my friends.” The seniors, unsurprisingly, take to the library over half the time, but also use the Senior Cellar for 30% of their free time.

Many members of the upper school faculty have complained about the conduct in the Commons, but Mrs. Culp, head of Student Affairs, does not always see the same problems. Her desk lies just outside the windows of the Student Commons, so she can see the students inside. “I think the behavior in the Commons is very respectful 99.9% of the time,” she said. “The students seem to be really enjoying it and using the space wisely.”

Possibly the most surprising fact uncovered by the poll is the difference between genders. According to the data, female upper school students spend a whopping 68% of their free time in the library and less than 15% in both the Commons and Inman Center. In comparison, males are in the library only 32% of the time, while equally wasting 32% of their time in the Commons.

Many different observations can be taken from the data. It shows that as a whole, students spend most of their time studying and doing schoolwork. Also, each grade has a different place where they tend to hang out. From the data, it appears the freshmen use the Inman Center, the sophomores choose the library, the juniors have the Commons, and the seniors take advantage of the Senior Cellar. It can be concluded, as well, that the girls at Pace are more studious than the boys. Is that accurate, though? Senior Austin Little agrees, but junior Philip Elliot does not. Despite what some debate, as the saying goes, numbers never lie.