Third Time’s the Charm with ‘Into the Woods’ 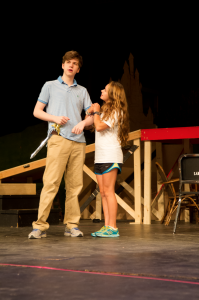 When the first-day-of-school jitters finally settle down and new daily routines set in, actors and actresses of all grades begin their preparation for a spot in the spotlight in Pace Academy’s annual fall musical.

This year’s musical, “Into the Woods,” puts a modern twist on the beloved “Grimms’ Fairy Tales” by intertwining the plots of choice stories and exploring the consequences of the characters’ wishes and quests. This humorous and heartfelt show follows the well-known tales of Cinderella, played by senior Caillin Cooke; Little Red Riding Hood, played by senior Annie Butler; Jack and the Beanstalk, played by freshman Cole McCorkle; and Rapunzel, played by junior Lexi Rubin. These tales are tied together by an original story involving a baker (senior Cooper Drose) and his wife (junior Tori Dancu) and their wish to begin a family. The baker and his wife face multiple interactions with the witch (senior Rebecca Husk), who puts a curse on them. The beloved story balances both the jubilant and melancholy events, all explained by the Narrator, played by senior Cooper Peery.

The cast for this fall’s production includes only 30 people due to the strictly-ensemble framework of the performance. “The hardest part about being a director is casting a show and not being able to give roles to everybody or not being able to give the role that everybody wants to them,” said director and World Literature teacher Dr. Mengert, or “Doc.” As a contrast to last year’s jaw-dropping performance of “Peter Pan,” this year’s show does not cast any middle school students, something that cast members jokingly argue to be a positive. Along with being a witty and entertaining show, the storyline questions deeper issues, such as the idea of an ever after and how far one will break one’s moral code to make a wish come true. This is also the only musical that Doc has directed three different times due to his affection for the show’s message and vocal difficulty.

Having started rehearsal the first week of school, the cast works hard about three hours a night in the FAC with Doc or in the chorus room with music director Ms. Wallace. “My favorite part of rehearsal is hanging out with my friends, like Willie, because in the musical she used to be my wife,” said junior Harrison Ray, playing Cinderella’s father. “I’m excited for this show because of my tree,” said sophomore Willie Lieberman, recalling her staging while playing Cinderella’s mother.

Along with memorable rehearsals, cast members agree that what they will miss most after this production are the seniors. In addition to Annie, Caillin, Cooper and Rebecca, senior cast members include Sam Nail and Davis Miller. “I will miss everything about them,” said Doc. “I’ve worked with a lot of them from the start of sixth and seventh grade. I picked this musical for them. Not only will I miss their talents, but I will miss their personalities.”

Strongly supported by Doc, the parent volunteers, technical director Mr. Sargent and Ms. Wallace, this year’s production will be ready for curtain November 13-16 with student tickets going on sale for $10. “The steward [sophomore Mitchell Zwecker] may or may not kill someone in Act Two,” said Doc, aiming to tempt his prospective audience.