Get the Lowdown on Music Midtown 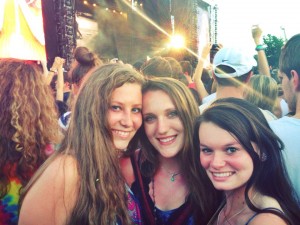 Music Midtown was a hit! Filled with good music, good food, and, most of all, good friends, the annual Atlanta music festival was enjoyed by all. “I liked [the concert] a lot because the music was good and all of my tons of friends were with me,” said sophomore Rob Warren. Roughly 100,000 people attended the concert in Piedmont Park, and a plethora of food stands and trucks were in place to feed the masses with hundreds of vendors ready to receive the concertgoers. “Music Midtown was the coolest, and I liked it a lot because the music was fun,” said sophomore Ben Adair.

Music Midtown is among the most anticipated Atlanta concerts. The sold-out festival had fantastic weather with a high of 84 degrees on both days. Despite its success, Music Midtown is no simple feat, as the construction of the festival takes weeks to complete. Due to the outstanding artists and reputation of the festival, tickets for both days were expensive, costing a whopping $150. Sophomores Max Irvine and Parker Payne avoided this cost by helping set up food trucks on Friday, the first day of the festival, to acquire free tickets.

This year, the lineup was off the charts with Eminem, Jack White, Zac Brown Band and John Mayer as the headliners. In addition, Bastille, Run DMC, Lorde, VIC Mensa, B.O.B and many others performed. The atmosphere was intoxicating – literally. The overarching cloud of marijuana engulfed attendees as they passed through the gates. Drunkards lay strewn across the park under the influence – of music. Friday began with Ron Pope and Mayor Hawthorne, and transitioned to Iggy Azalea, Run DMC and Lorde. To finish the night, Jack White and John Mayer performed, attracting thousands of visitors with a mix of their classics along with their new hits.

Besides the music, the festival offered other attractions, including a Ferris wheel, tons of food trucks and a market where one could buy different trinkets. Saturday kicked off  at 12:15 p.m. with about double the number of visitors as Friday. Festival goers trickled in throughout the day, and the festival climaxed at 9:00 p.m. when the headliners’ performances began. Eminem began with music from his most recent album, The Marshall Mathers LP2, and changed halfway through the night to his most popular songs like “Monster,” “Rap God” and “‘Till I Collapse.” Eminem closed his show with “Lose Yourself,” during which the crowd went bonkers with excitement.