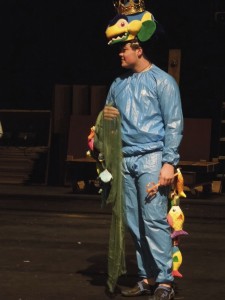 Halloween and trick-or-treating, ancient traditions that date back more than 2,000 years, fill kids and teenagers alike with great joy and a tummy full of candy. Trick-or-treating has been going on for at least the past 100 years in the United States. However, historians believe that the holiday was celebrated in ancient Celtic festivals, Roman Catholic holidays, and in England. The Celts believed that during the festival of Samhain on Oct. 31, the dead would return to earth. Villagers dressed up during Samhain and wore costumes made of animal skins to help scare away demons. One thousand years later, the day began to evolve as impoverished people in England dressed up and asked the wealthy for gifts known as soul cakes.

The holiday became part of American lives in the mid 1800s when many Irish people fled their country during the potato famine to the United States, bringing traditions with them. By the early 1900s, Americans began to fully adopt Halloween. Trick-or-treating became popular with kids between the 1920s and 1940s. According to the History Channel (History.com), Americans spend approximately six billion dollars a year on Halloween. This crazy amount of money is spent on candy, decorations, costumes and party supplies.

Trick-or-treating calls to mind great memories for Pace students. “In my neighborhood, police come and block off the streets so it’s safe for kids,” said senior Anna Hoffman. “They drive on their motorcycles up and down the streets throwing candy.” Some students recalled memories of spending time with friends and dressing up together. “My middle school soccer team won the championship, and then later that night we all went trick-or-treating together,” said senior Cassady Greene.

A common thread of Halloween memories stems from students receiving large amounts of candy or taking more than they were supposed to grab. “One time I took the whole bowl of candy even though the sign said take two pieces,” said freshman Jonathan Rushton. Senior Hank Assaf and sophomore Kate Bethel also had similar experiences where they took more candy than the sign said to take. Candy, the driver of trick-or-treating, provides a yummy reward for students who dress up and trek across neighborhoods. Students who were questioned largely agreed that Reese’s were the best candy to receive and devour. Even as high schoolers, many students still go trick-or-treating for the free candy.