Pace Prepares for Another Season of Fantasy Football 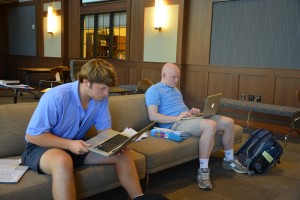 Fantasy football is now in full swing as students and faculty alike compete to be the best pretend general manager in their respective leagues. People can hear potential roster moves and trade propositions around campus with participants always worrying about their match-ups. After months of preparation from mock drafts and stat-checking, the season is finally here.

Many believe that the level of dedication and will to win have risen to new heights this year. “I wake up at 4:30 every Wednesday to get on the waiver wire and try to pick the weekend’s best breakthrough players,” said junior Owen Moncino. “So far my team has not necessarily shown success, but I’m staying optimistic.” Those who aren’t involved in fantasy football believe it has a positive effect on the Pace community. “Fantasy sports seem to be a much better outlet than gambling,” said junior Darby Cochran.

Some students were asked if they would rather have their fantasy team win, or their favorite NFL team. “My fantasy football team,” said senior Elijah Sheft. “Who has a better chance at winning a championship? I have to always give myself a chance for a W in fantasy.” When asked the same question, Assistant Athletic Director Mr. Whyte responded, “Fantasy is fun. I’ve been in the same league for 15 years now. But at the end of the day, the Buccaneers (who recently lost to the Atlanta Falcons 56-14) are more important. Fantasy football is just a game.”