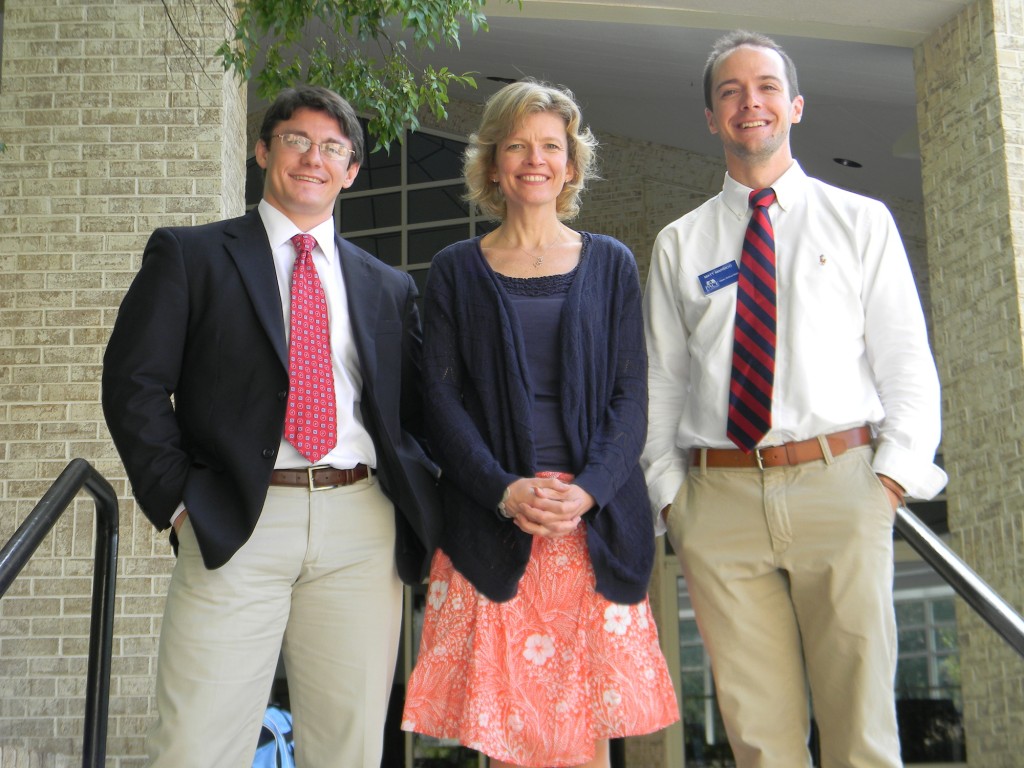 Pace welcomed seven new teachers to the Arthur M. Blank Family Upper School this year, along with head girls basketball coach Brian Jones. This story is the second installment of two parts featuring new faculty and staff members. The first installment appeared in the September 19 issue of The Knightly News.

Dr. Christine Carter, the new AP US History teacher, came to Pace after having taught at Emory University and Georgia State University. “I’ve found the students [at Pace] to be much more engaged and overall more motivated and focused, so I’ve really enjoyed that,” said Dr. Carter. Not only is Dr. Carter a new faculty member, she is also a Pace mom. Her son Jeb is a freshman. “He’s a really good sport about having me around, and it’s handy, so I’m happy about it,” said Dr. Carter.

Pace is like a family for Dr. Carter. “I guess most importantly, I feel that I’m a part of a real community now, and I didn’t really feel that sense of community at Georgia State because it’s so big,” she said.

Pace welcomes Coach Brian Jones as the new head girls varsity basketball coach this year. Before coming to Pace he had coached at a high school in Atlanta, a middle school in Canton, and another middle school in Jackson, Miss. “The kids are the same, but there is a different level of commitment from public school kids,” said Coach Jones. “Those kids don’t have a way to pay for college so they’re using sports as their way to get to college, whereas at Pace the kids can go to college without an athletic scholarship.” While looking to improve the Pace girls basketball program as a whole, he aims to start with the Middle School by having them run plays to prepare them for the high school level. “I am enjoying coaching the girls so far, but I’m also nervous for the girls,” said Coach Jones. “I want them to have a really good experience playing. We want to win, but I think that will take care of itself.”

Joining the Pace community as both a history teacher and lacrosse coach, Mr. Grady Stevens is excited to spend his first year of teaching at Pace. “I chose Pace for the people,” he said. “Interviewing with Mike Gannon and several of the upper school faculty made me want to begin the job as soon as the interview was over.” He studied at Johns Hopkins, where he worked as a volunteer lacrosse coach as well. His first impression of Pace was that “it was strongly centered around the family and close interaction between faculty and students.” While starting a first job can be stressful, Mr. Stevens is eager to see what the year brings. “It didn’t feel so much like a job as it did an adventure,” he said.

An Atlanta native, Mr. Mathew Marsico (pronounced Mar-see-co) is not just another math teacher who enjoys running. He takes it to the next level, having completed two Ironman 70.3 races and placing in the top 5 percent of Ironman Augusta competitors. Mr. Marsico previously worked in Charlotte, N.C. at the Canon School, which is a similar-sized private school. According to Mr. Marsico, the biggest difference between Pace and the Canon School is in the students. “There is a stronger desire to succeed here,” he said. Like most students and faculty, his first perception of Pace was that it is impressive. “The buildings, the teachers, the administrators, the staff, the students… all were impressive, and I have felt a great sense of pride in knowing that this is the school that I get to call home,” said Mr. Marsico. Father of two, he is also overjoyed knowing he will be able to “partner with this community in developing them into the type of students that I am getting to work with in the Upper School now.”