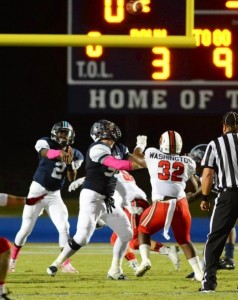 All of the Pace supporters that came out for the Homecoming game against Greater Atlanta Christian, the number 1 team in the state, knew that it would be a tough battle for the Knights. However, even though Pace lost, the young team showed signs of resilience and toughness that bode extremely well for the future. GAC won the game, 37-7, but a scoreless second half in which Pace dominated the time of possession showed that Pace isn’t far from challenging elite opponents like GAC and Lovett.

The main factors of the game for GAC were their two four-star recruits, wide receiver/cornerback Darius Slayton and running back Micah Abernathy. Slayton, who has received offers from a plethora of top universities, returned a punt for a touchdown and played a great game at cornerback, while Abernathy, who is currently committed to Tennessee, scored three touchdowns, including one long kick return for a touchdown.

Slayton’s punt return for a score right before halftime pushed the GAC lead to 37-7 at the break, and the game looked to be almost over. Pace came out strong in the second half, however, and led an 88-yard drive that took almost 9 minutes but ultimately fizzled out at the GAC 2-yard line.

The Pace defense also buckled down and held GAC off the scoreboard in the second half. The star of the first half offensively for the Knights was Realus “Booman” George, who scored the only touchdown of the night for Pace on a 7-yard run in the second quarter that cut the score to 10-7. However, Abernathy returned the ensuing kickoff 98 yards to push the lead back up to 10, and the Spartans never looked back. Senior quarterback Kevin Johnson also played well on offense for the Knights, as he played his most efficient game of the season.