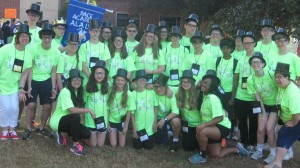 Where at Pace Academy can you find the unique combination of Latin-crazy people, students regularly seeking a teacher’s help, and freshmen with a quiz on Ancient Rome? You guessed it, the Junior Classical League, or JCL. It’s likely the only place at Pace where the feasibility of an aqueduct running from the fourth floor is discussed while students also ask how the gods could possibly have so many kids.

The club is unique due to its craziness and success on both the state and national levels. Many students are not aware that there are competitions for Latin students every year. Pace’s students have had immense success at the Georgia Junior Classical League Convention, a convention spanning three days taking place at Rock Eagle 4-H Center. Pace had three students place in the top 50 of over 1,000 students participating in the convention, and Pace placed fifth overall out of over 70 schools. Pace’s group of students spans grades 7th through 12th, and they compete in races, academic competitions and a Latin quiz bowl known as Certamen.

This year the outlook for the equites (knights in Latin) is brighter than ever, with senior Davis Miller and junior Andrew Wu leading the club. The teacher sponsor for the club is Latin teacher Mrs. Kann. “Our goal is to appreciate the classics in all aspects of study,” said Andrew. “We even build our own chariot for races.” Members often credit the club as the most unusual and enthusiastic at Pace. “Usually, JCL is the craziest club at Pace,” said Davis.

As JCL members look forward to the year ahead, many opportunities to show off their Latin knowledge are not too far away. The annual Fall Forum is coming up on Oct. 25 at Northview High School, and the Georgia Junior Classical League Convention is in April. Pace’s students are renowned for their success at both events, and they are ready to “carpe diem,” or “seize the day.”