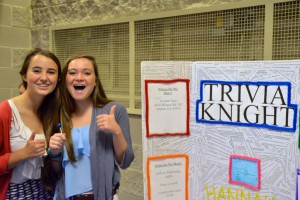 A record 54 clubs took their place in the Inman Center at Club Fair on Sept. 17. Many new clubs such as the National Handball Association of the Academy (N.H.A.A.) and the Animal Service Club added a spark to Pace’s club life. Club veterans such as Trivia Knight and Baking for Breast Cancer still thrive as they prove to be among the students’ most beloved.

These clubs impact the community in extraordinary ways, and club leaders were asked to elaborate on this aspect during the club application process. For example, Baking for Breast Cancer donates 100% of the proceeds of bake sales to the National Breast Cancer Foundation. This past year, club head and senior Dylan Steinfeld helped raise some $3,935 for the cause. Those funds, plus money raised so far this year, bring the five-year total to $17,459.

The National Handball Association of the Academy, headed by sophomores Barrett Baker, Ben Siegel, Mark Sommerville and Sammy Tanenblatt, brings a new sport to Pace. “The real question is what isn’t the best part about our club,” said Ben when asked what’s special about the N.H.A.A., “Clearly, it is a top club.” The sport (at Pace) is based on seven basic rules. Players are allowed three steps with the ball and three seconds with the ball, and it is illegal to complain to the referee, to name a few of them. This club is purely fun-based, but there are other clubs that are focused on service.

The Animal Service Club aims to visit shelters and rescue groups around Atlanta. Their plan is to visit during the shelters’ adoption days and walk and otherwise take care of the dogs. The club plans to visit PetSmart frequently. “I thought it was important to start a club that helped animals that can’t help themselves,” said junior Frances Crisler. “We have lots of clubs that help other people, but [junior] Haley Epstein and I thought that helping pets would be new and have a positive impact on the community.”

A polished veteran, Trivia Knight, is extremely popular with students and teachers. “Trivia Knight is the best club ever because it’s a great chance to hang out with your friends and learn at the same time,” said senior Hannah Kelly. “We are the only club to have ever run a restaurant out of business by taking advantage of their free chips. R.I.P. Twisted Taco.”