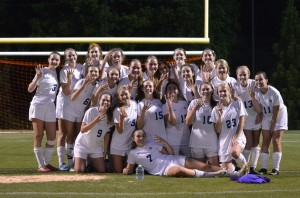 The girls soccer team celebrates after beating HIES in the Elite Eight of the state tournament. Photo: Fred Assaf

The winter and spring athletes have achieved tremendous success, both individually and as teams. Below are some of the highlights.

Gwynnie LaMastra, Brenner Appel, Grace Ferry and Madison Graham were named All-State in swimming and all qualified for individual events at the state meet.

Owen Moncino was named All-State and placed third in the state for diving.

Jack Walsh was named All-State in wrestling and placed fifth at the state meet.

Boys Track and Field brought home another gold cup for the track team, placing fourth overall at state. Josh Rogers had 6th and 7th place finishes in the 1600 and 3200 meters, reaching the medal podium in both. The 4 x 100 of Deon Jackson, Xori Johnson, Jordan Brown and Kenny Selmon beat their 5th place seed with a 4th place finish. In the 110 hurdles, Kenny set another school record and state record with his 13.96 time while on his way to being state champ. In the 300 hurdles Kenny broke his own school record yet again, broke a 20 year old state record and ran the fastest time in all classifications. The 4 x 400 relay team of Xori, Josh, Jordan, and Kenny ran their fastest time of the season and crossed the line as state champs.

Girls Tennis took the Area 3 title en route to the Elite Eight round of the state tournament.

Boys Tennis won their region and made it to the Final Four round of the state tournament.

Arden Carlton will end her Pace career as the second all-time leading scorer for girls soccer with 43 goals.

Boys Soccer made it to the Elite Eight in the state tournament.

Girls Lacrosse beat their record, 6-12 on the season, with two area wins for first time ever.

Boys Lacrosse made it to the first round of the state playoffs.

Julia Beck represents Pace at the state tournament for girls golf on May 19.

Boys Golf placed fourth in the sectional tournament and Alex Ross represents Pace at the state tournament on May 19.

Along with these achievements, Pace Academy is sending a record nine students to play college sports. See “Pace Forever Changed by Class of 2014” for more.

Congratulations to all Pace athletes on their amazing achievements this year!