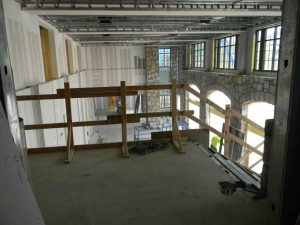 Stone is a major part of the new upper school, inside and out.
Photo: Dean Papastrat

The architects of the new Upper School, Collins Cooper Carusi, have utilized structural elements from the Castle as well as modern ones in their design of the building; however, many may not be aware of how the firm took a similar approach with the interior. “We wanted to take the traditional Pace feeling of community and blend it with the technology of the 21st century,” said Pace parent Stephanie Blank, who was involved in many of  the design decisions. One can definitely feel this throughout the entire building, especially given the unique way the interior merges functionality and appearance.

One of the most important aspects of a space, color scheme, truly sets the new Upper School apart from many other educational buildings in the area. Soft earth tones, light cream colors, and multiple shades of grey along with deep blues will create a soothing environment, while splashes of brighter colors and student artwork will liven up the halls. These colors flow not only along the walls, but also into the floors, fabrics and frames.

The bathrooms are tiled with dark grey ceramic squares on the floor and light brown on the walls, and include color accents as well. Stone, similar in appearance to the entrance of the Inman Center, appears often and adds a nice contrast to the clean lines by providing a rich texture. The floors are covered with a variety of materials, from a special type of laminate that mimics hardwood in the hallways to individual carpet tiles in each classroom, which make cleaning a spill a breeze. The student art will be shown in special inset display cases as well as on special rails made specifically for hanging.

The new seating options build upon both the color scheme and blending of old and new by using the colors on traditional-type fabrics. Students will see this incorporated into many of the built-in couches and seating areas throughout the new building. Many of the freestanding chairs in the library and common areas will be made of durable wood, personally tested by Dave Fortier, Pace facilities manager. However, some chairs will be special; for example, some areas of the library will have “active seating,” which will force users to continually adjust their position by employing their abdominal muscles. According to research, this encourages focus and learning, while also giving students a workout of sorts.

Just as the seating focuses on durability and usability, the workspaces share many of the same traits. New desks, made for both left and right-handed students, use a special base that prevents rocking and enhances their longevity. In addition, the desks can even be fit together to make different shapes in each classroom. In the library, beautiful wooden desks will feature special outlets and other technology ports directly integrated into the center of the table, allowing students to connect without stretching cords across the floor.