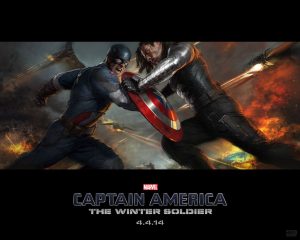 The second installment in the Captain America franchise stars Chris Evans and Samuel L. Jackson, among others.
Photo: Marvel.com

Marvel’s first avenger returned to the screen on April 4 in “Captain America: the Winter Soldier.” Set after the events of the wildly popular movie, “The Avengers,” Steven Rogers is now an agent for the intelligence agency known as S.H.I.E.L.D. In the movie, Captain America must fight his toughest enemy yet, the mysterious winter soldier, and uncover the truth behind who he is working for and what they are planning.

I had the chance to go see the film recently, and I can honestly say that it exceeded all expectations. The action scenes ranged from hand-to-hand combat to all-out battles between flying aircraft carriers. Samuel L. Jackson played his role to perfection as a charismatic yet untrusting leader. As before, Chris Evans played the role of the indefatigable hero who fights for truth and justice. This movie is the first time in the Avengers series that the audience sees the true personality of Black Widow (played by Scarlett Johansson) beyond her usual overly confident, know-it-all facade.

“Captain America: The Winter Soldier” grossed a whopping $95 million during its opening weekend, leading the American box office. The movie marks the third installment in what Marvel is calling “Stage 2” of their continuation of the Marvel universe. Other movies in this stage include “Iron Man 3,” “Thor 2,” “Avengers 2” and “Guardians of the Galaxy.” For those who would like a sneak peek of what’s to come, make sure to stay through all of the credits, as there are not one, but two post-credit scenes. It’s confirmed that Captain America will return for the next Avengers film.