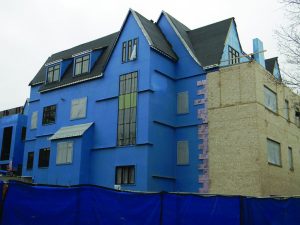 The unfinished brick work is a result of the halt in construction.
Photo: Sam Rubenstein

Over the past year, members of the Pace community have watched as the new Upper School building has slowly come together. At first, it was an unrecognizable mass of steel beams. Then, the steelwork was completed and the concrete poured, and we started to see a building take shape. Next came the insulation, followed by bright yellow, then blue coating. With each step, our anticipation grew, but it looks like our high hopes could be crushed, with the fate of the building in limbo.

Everything seemed to be running smoothly until January, when steel union workers began protesting the construction company’s use of non-union labor. “Shame on Pace” signs were placed along West Paces Ferry to garner support. Nevertheless, the construction continued. More recently, however, despite the lack of an actual steel union in Georgia, the protesters have gained traction, stalling the construction process. This shift occurred when Pace stopped using the non-union steel workers upon completion of the steel structure. The steel workers claimed they were being unfairly treated. Now they have taken Pace to court, stalling any additional work on the building for an indeterminate amount of time.

This bad news was only made worse in late February, when construction workers found a historic Pace family cemetery bordering the Assaf’s house and extending out across the driveway, along the Upper School building. According to Georgia building codes, the construction must be reviewed by an appeals court, to decide the ultimate course of action. Traditionally, construction sites are diverted, meaning some sort of tunnel or other work around will have to be devised with the new driveway, to avoid creating trouble with the Atlanta History Center as well as other preservation societies.

These major setbacks have dwarfed the fact that all furniture and installations for the new building are on back-order, due to the severe winter weather around the country. While originally scheduled for shipping in early June, the majority of the desks, air conditioning units, and whiteboards will not arrive until mid-July. Assuming building construction overcomes the aforementioned obstacles, students and faculty may be looking at empty rooms, and sweltering in the August and September heat.