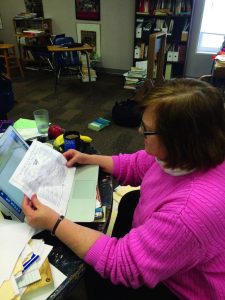 A major obsession for many at Pace after spring break is the filling out of March Madness brackets. Most participate in competitions with other students, some with money on the line. Some participants will fill out one bracket, while others make 10 or more. Not only do students participate, teachers also enjoy making  selections for the tournament games. Overall, most at Pace participate in the madness, whether for the love of the sport, the desire to win, bragging rights or monetary incentives.

But the biggest bracket competition at Pace is one you’ve never heard about. Five or six Pace teachers, including Ms. Smith, Dr. DuPree, Dr. Link, Dra. Pontes and Dr. Pearson, participate yearly in a high-stakes bracket competition, with up to $5,000 in payouts to the winner and second-place finisher. These teachers may appear to have a lack of interest in college basketball, or even sports in general. However, they have become ridiculously accurate in their predictions due to a wild system of strategies that help them pick the correct games every year.

“I prefer to look at the mascots based on historical significance, or contemplate which one would win if you fought them against each other,” said Ms. Smith, the reigning champion of the competition. “For instance, the Spartans would have used their superior military tactics and formations to defeat an army of Blue Hens,” said Ms. Smith, referring  to the first round game between the #4-seed Michigan State Spartans and the #13-seed Delaware Blue Hens.

Dr. Link bases his predictions on a highly confidential list of colors that are in a hierarchal order. “Blue is the top color. Preferably shading from light to dark. That’s all I can disclose at the moment,” he said. Dr. DuPree won the competition in 2011 when he correctly predicted Duke, Butler and VCU to reach the Final Four, yet his strategy was luck. “I just randomly guess, although Duke usually goes pretty far in my bracket,” said Dr. DuPree.

Dr. Pearson is the one you should go to if you’re having trouble predicting the upsets in the tournament. His complex system of mathematical formulas have predicted most major upsets in recent years, most significantly Florida Gulf Coast University, a #15 seed, over #2-seed Georgetown last year. Sometimes, however, he predicts too many upsets such as 16-seeds beating 1-seeds six times over the past four years.

Although most of these faculty members have little-to-no interest in college basketball, they enjoy the challenge of such a complex game, and don’t mind the payout involved either. “I just think the different match-ups are so cool. I mean, who knows who’s going to win what game? What upsets are going to be involved?” said Ms. Smith. The teacher with the wildest bracket this year is Dr. Link, who has his two favorite teams, the Texas Longhorns and the UNC Tar Heels facing off in the Championship. “Even though it may seem outlandish, I believe both teams  are going to make deep runs this year,” said Dr. Link.