Pace Football to Move to 6A Next Year 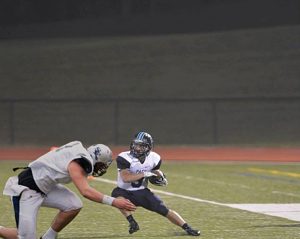 In a surprising move, Director of Athletics Chris Palmerton has announced that next year the football team will be competing at the 6A level. “It was a very easy call to make after the success the football team has had at the 1A level,” he said, “I realize that the competition will be slightly tougher, but I’m confident in Coach Slade’s ability to put a winning team on the field.” Other 6A football teams include Norcross, Hillgrove, McEachern and Lassiter. Although GHSA usually bases a school’s classification on high school student body size, GHSA decided to make a special exception for Pace because the school’s athletics surpass the abilities of other schools within Pace’s classification.

Pace students have had a wide range of responses to this change. “I have no doubt that we will still be the toughest team in our division,” said junior Trevor Cefalu, “I doubt any other team goes through the tackling drills we do every single day. Plus the guardian helmet covers allow us to hit even harder than the other teams during practice.” “I don’t care what division they put us in, you’re still gonna see us in the Dome next year by December,” said freshman DeAndre Byrd. The most enthusiastic response came from sophomore Jack Walsh. “All that’s changing for me is now I get to throw bigger guys to the ground. I’m still gonna dominate anyone I go up against,” he said. To further prove his point, Jack proceeded to shove classmates out of his way and continue walking to his next class.