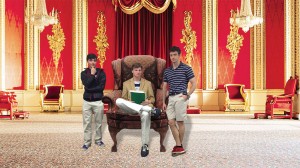 Knight Capital has been a well-respected club in the Pace community and has donated nearly $11,000 of student-earned profits to Pace over the years. The club has even started a teaching award. However, things have taken a turn for the worse when massive corruption was recently uncovered.

The club is led by seniors Mark DiMeglio, Will Rucker, and the Silverstein twins. This year, a generous Pace parent gave each leader $500,000 to invest in order to work with the club’s members and teach them about the stock market. Early last month, it was discovered that the three males, the Knight Capitalists, engaged in illegal activities and made millions in the process.

Investigators learned that Mark has covertly been running a Ponzi scheme in honor of his role model, Charles Ponzi. In a span of five months, Mark earned $15 million. Mark talked the members of his groups and many other Pace families into giving him the money by promising 50% returns in a matter of days on their original investment, but he kept the money for himself instead. It is unlikely that the victims will be repaid their initial investments, because he ingeniously set up multiple offshore bank accounts in the Cayman Islands, Dubai and Singapore under multiple aliases, such as Marky-Mark and the Marksman. Freshman Christopher Howard was a victim of the scheme. “I gave Mark all of my allowance. He promised me enough money to buy the new bike I wanted, and now I can’t even afford a 50¢ coke at the snack bar,” he said.

Will was part of an insider trading scheme that garnered him $7 million in profits. “I wasn’t really surprised when I learned that Will was corrupt,” said Knight Capital adviser Mr. Newman, “He always seemed like the quiet, calculating and lethal type that would be able to pull off such a feat.” Will worked closely with Chad McGinnis, employee of Green Mountain Coffee, in order to gain inside information to predict the company’s stock prices. Will is awaiting trial by the Securities and Exchange Commission (SEC) and faces 20-35 years in prison. Will denies all claims of insider trading. “I don’t think it’s fair for me to be accused of insider trading,” he said, “I just really like coffee, and I just happen to be psychic.”

Kevin, a notoriously lazy student, has taken his slothfulness one step further and become the underachiever of the group. Instead of engaging in a laborious and time consuming scheme, Kevin decided to keep the original $500,000 investment for himself instead of investing the money, which is now safely stashed in a Swiss bank. He plans on using the money to pay for his lavish lifestyle until he can find a rich wife to marry. “I plan on moving out to Vail, Colo. and becoming a ski bum so I can find a cougar to support me financially,” Kevin said.

It is unclear if any of the Knight Capitalists will be convicted by the SEC and sent to jail, but it is certain that they have tarnished the good name of Knight Capital and made millions in doing so.