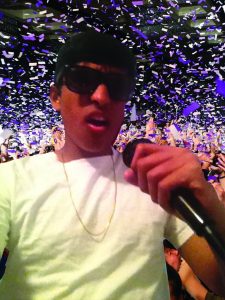 Jay believes that he is the best thing to happen to music since Nickleback.
Photo: Hayley Silverstein and Dean Papastrat

Senior Jay Kumar has long been serenading the Pace community with his celestial renditions of “Sunday Morning” and “Hit Me Baby One More Time,” but he will now be serenading the world.

On March 5, Jay Z was visiting Goldberg’s at “Way Pay” when he heard “the voice of an angel;” that angel was none other than Pace’s own Jay Kumar. Jay Z immediately approached Jay and begged him to sign for his label, Roc Nation. “Jay oozes confidence and I feel like he has the potential to be the next Justin Beiber,” said Jay Z. Under Jay Z’s guidance, Jay will legally change his name to Jay K. “I really feel like changing my name will help me reach that next step of stardom, kind of like when Ron Artest changed his name to Metta World Peace,” said Jay K.

Jay K will be launching his global tour this summer, “Kumar the Superstar Origin Tour,” despite not having released any original songs. “I really feel like I am known for my covers, so I am just giving the people what they want,” said Jay K. Songs such as “California Girls” by Katy Perry, “Tik Tok” by Ke$ha and “Levels” by Avicii will be heard on the tour. Jay K has long been a devout worshiper of pop music, so it is no surprise that he will be paying homage to some of the greats like Carly Rae Jepsen. While some may classify Jay K as a pop star based on the songs he sings, he was offended when the term was used to describe him. “I am not a pop star! I am an artist with massive amounts of popularity, who is gracing the world with the gift of my voice and catchy songs that all sound the same,” said Jay K.

Jay K’s younger brother Prashanth will not have to miss his brother as he parties with the rich and famous, because he will be busy at college. “I really think Jay has reached his peak, and I can’t wait to watch the inevitable insanity that all pop stars go through,” said Prashanth. Jay K reassures us that fame will not change him: “I will just have cooler friends and less time for everyone else, because I’ll be hanging out with my home girl, T. Swift.” Since Jay K has always been a superstar within the Pace community, hipsters at Pace will be able to claim that they “knew him before he was a world famous.”