Upper School Toilets Take a Turn for the Worse 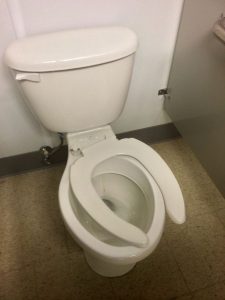 Toilet seats all over the Academic Village are falling apart.
Photo: Dean Papastrat

The arrival of the Academic Village this year brought better climate control, an improved classroom layout, and huge amounts of space, but it’s lacking in one of the most important areas of all: restrooms. Many of the toilets in the temporary Upper School have broken seats, which has caused a great deal of commotion among students. Senior Evelyn Hobbs once almost fell into the toilet when she sat down and suddenly felt the jolt of the seat sliding out underneath her.

Though this was initially an issue at the start of the year that surfaced every three to four weeks, problems with toilets are now occurring more frequently. Most complaints come from girls across the upper school campus, all of whom are upset because of startling experiences. However, the problem is not confined to the girls’ restrooms. At one time in the A trailer, four of five stalls in the boys’ restroom were out of commission due to broken toilet seats.

The Student Council was notified of the issue several months ago and decided to act. Student body president Katherine Merritt proposed handing over the task of restoring the toilets to the Trailer Committee, which deals with all student complaints related to the Academic Village. Since then, senior Wylie Heiner, president of the Class of 2014 and Student Council Trailer Committee chair, filed complaints with the Pace maintenance department. He hopes that the issue will be resolved soon.

Categories
Life At The AcademyPace News