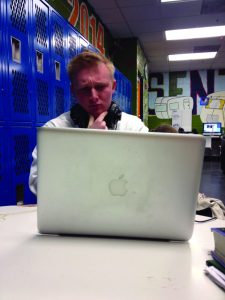 Pace Academy has a plethora of musical talent in every grade, but no student is as ambitious as senior Jake Pokalsky. Jake first began playing music when he was in the sixth grade. Like most middle school boys, Jake was interested in the guitar and strove to learn how to shred the guitar like his favorite band Metallica. Later on in middle school he formed a band (Edge of the Earth) with classmates Jacob St. Amand, Charlie Burruss, Tommy Burruss and Jones Kolbinsky.

During his sophomore year, Jake began experimenting with freestyle rapping. He was named “Machine Gun Butters” due to his ability to spit bars at a rapid pace and because he looks similar to the “South Park” character, Butters. “MGB” took his freestyle talents to the Inman Center at Pace where he challenged anyone who challenged him. Jake rarely lost and became a local legend.

By the start of his senior year, Jake wanted to become more serious and began producing and recording music. He changed his name to “Leo Stotch” (the real name of Butters from South Park) and posted his first song,”Tangential Thoughts,” on Sound Cloud for the entire world to hear. The song contains a catchy beat and chorus, with very deep and thought-provoking lines. Jake got a lot of feedback from his first song and is using it to improve his music.

Jake is also working as a DJ with Jacob in their group “Efflux.” The two of them played at the last Pace dance of the year in February and many came away surprised with how good they were. “My body lost control when I heard Efflux spin those nasty beats,” said senior Riley Muse. Sophomore Aaron Davis also liked Efflux, saying, “Miles Sheft was good but they had a lot more energy and I thought they were better.” The group has also recently been developing dub step and plan on dropping new material very soon on Sound Cloud.

Jake has plans to continue making music. “Music will always be a part of my life,” he said, “I don’t see myself ever quitting making music. I can only do math for so long, but I can sit down and make a new track for hours without glancing at the clock.” Jake is working on a new song on sound cloud called “check please,” so be sure to look out for it when it is released in the near future.