Lego Movie Fun for Everyone 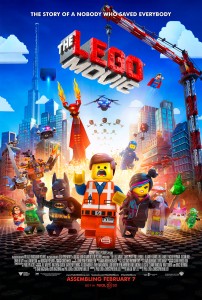 The Lego Movie is packed full of excitement for all ages.
Photo: thelegomovie.com

For those thinking about seeing “The Lego Movie,” I have one crucial piece of advice: leave your intelligence at the door. Although cute and at times witty, the movie does not have any sort of depth in the plot or the characters themselves. What it lacks in depth, however, it makes up for in charm and non-stop laughs. “The Lego Movie” will bring out the inner child in even the hardest of hearts and provides entertainment for the entire family.

The main plot of the movie is that the evil Lord Business (Will Ferrell) is attempting to take over all of Legoland and only Emmet (Chris Pratt), a simple construction worker, can stop him from achieving his goal. With the help of Vitruvious the Wizard (Morgan Freeman), Batman (Will Arnett), and the mysterious Wildstyle (Elizabeth Banks), Emmet learns new things about himself and the world around him on his path to victory. Other members of this star-studded cast include Jonah Hill, Liam Neeson, Dave Franco, Charlie Day and Shaquille O’Neal.

As a comedy, “The Lego Movie” receives great scores in my book as the whole theater, even the adults, were laughing from the beginning sequence to the closing credits. Watching a movie like this reminds everyone of the power of a child’s imagination along with the damage adults can do when they fail to foster that imagination, or even worse, deter a child from using their imagination.

With its laugh-out-loud comedy, amazing cast and incredible animation, “The Lego Movie” is a great movie to take your younger siblings to or the entire family. One of the best parts of the movie is that the comedy is aimed at both younger viewers and older ones, allowing for everyone to have a good time at this heart warming film.