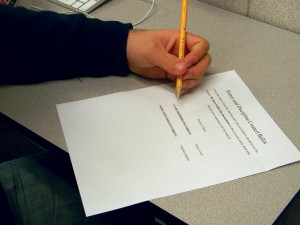 The ballots for voting strongly favor the incumbents, because of their bolded names.
Photo: Dean Papastrat

The Honor and Discipline Council has elections every year, but the elections are not competitive and members are not held accountable by the student body. In eighth grade, students self-nominate themselves to be on the council and the class votes by circling names on a piece of paper, without any type of campaign or speech. Once elected to the council, members invariably serve all four years, despite each term being only one year. Every year before voting the students are told about the importance of electing the incumbents, because they have knowledge of the council.

I agree that it is important for the council members to have experience. However, the elections give a false hope to the students who want to be elected. If you came to Pace in high school, or were too shy to nominate yourself  in eighth grade, or did not win in eighth grade despite being qualified, you will probably never win the elections in future years. Not only are the students encouraged to re-elect the current members, but the incumbents’ names are bolded on the ballot, which shows a clear bias.

Council members are also not held accountable, because of their de-facto guarantee of being re-elected. Teachers are not always aware of students’ actions. If a member of the council breaks school rules, the council member doesn’t have to answer for their actions or be removed from their position, because they are protected by the current system if no teacher sees the misbehavior or other students don’t report it.

Experience is an important element to the Honor and Discipline Council and there are better ways for that to be insured without the facade of elections. Instead of voting based only on the names on the ballot, candidates should be able to give a speech in order to ensure that students make well-informed decisions. I have never known an incumbent to not win re-election; it would just be easier to get rid of the annual elections, because bias towards incumbents from teachers continues to sway votes in their favor.

It would also be more fair for the freshmen if elections were held after the first month of high school, because there is a large influx of students that year that do not have the opportunity to serve, because they were unable to run in Middle School.