Pace Reacts to Snowpocalypse, Round Two 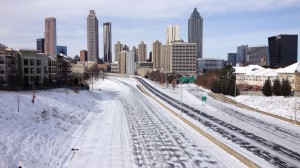 An intersection in downtown Atlanta seems to be deserted as people stay home to escape from the winter weather.
Photo: wsbtv.com

After the disaster that left thousands of cars stranded across Georgia’s highways two weeks earlier, a second winter storm struck Atlanta in the early hours of Feb. 12. Though predicted to be greater in severity, it turned out to be less of an issue because residents heeded the warnings of the National Weather Service.

By removing students from schools and workers from offices, the state successfully managed the storm and treated the roads so that the city wouldn’t have a repeated catastrophe. The only major problem that occurred was the loss of power for hundreds of thousands of people due to the ice, but even that was quickly remedied by electrical crews.

Athough the precautions may have aided storm management, they also caused schools to lose valuable class time. Pace Academy, Westminster, and other schools removed holidays such as Presidents’ Day from their calendars in order to make up the days off, while some other school districts used special legislative acts that revolved around the declaration of a state of emergency to prevent having to make up additional days.

Overall, although the citizens of metro Atlanta remained safer during this storm, the educational price of missing school days may prove to be high as AP exams quickly approach. Stay on the lookout for updates from the Knightly News regarding Pace’s plan to recoup lost days.