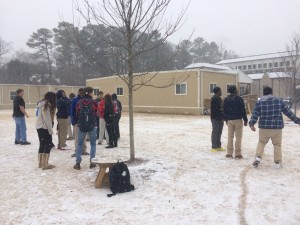 Sophomores threw snowballs, made snow angels, and shoved ice down each other’s shirts as the snow started to stick to the grass.
Photo: Dean Papastrat

On Jan. 28, the entire Southeast felt the brunt of a powerful winter storm that covered the landscape with a few inches of snow and the roads with a sheet of ice. Pace students experienced a variety of effects from the unexpected polar blast, ranging from snow days to commute times that stretched for hours and, in some cases, overnight. Though local meteorologists originally predicted the storm to cause little icing or accumulation, the actual storm created havoc on the roads, left students stranded and brought commerce to a screeching halt.

Flurries began by mid-morning, around 11 o’clock, and continued to increase in severity. Students enjoyed having snowball fights, making snow angels and catching flakes on their tongues. Sixth grader Ben Tolliday practiced his accuracy with snowballs on a tree, and commented on how fun it was to have snow at school: “I love playing with my friends! It’s really unusual to get to see them while it snows, but I wish it could be this way all the time.” Many of the sophomores frolicked in the school after the early dismissal, and screams and shouts of students getting snow shoved down their jackets filled the campus with excitement. Police officer Jonathan Cornelius joined in the fun as well, and posed with a snowball on the lower school playground. Students were ecstatic at the prospect of a snow day, and the campus seemed to have a festive air about it. 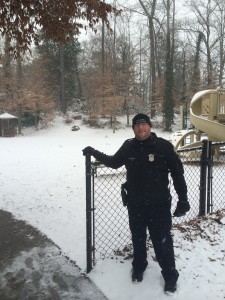 Officer Jonathan Cornelius joined in the fun with the snow while protecting the campus.
Photo: Dean Papastrat

Snow showers quickly blanketed all of Pace, but the flakes soon turned to slush and froze into solid sheets of slippery ice. Pace’s decision to release students in advance of the worst weather came too late at 1 o’clock, and although some students who live relatively close to Pace sped home without much trouble, others found themselves stuck in horrible traffic for over nine hours or stranded.

Immediately after school closed, people left in swarms to get supplies for the sub-freezing temperatures. “You would think there was a zombie apocalypse going on with all the traffic and ransacking of grocery stores,” said senior Charlie Burruss. Yet, the scene in Atlanta very much resembled “The Walking Dead.” On many roads, cars were abandoned, lanes ceased to exist and drivers failed to follow any rules. Chaos ensued as people struggled to get home, and conditions only worsened as temperatures dropped and the partially melted snow turned to ice.

“At first, I was optimistic about the Snowpocalypse, but the weather conditions became so hazardous that I had to abandon my car and belongings at the highway exit and walk home,” said sophomore Andrew Wu, “It was disconcerting to see the various cars, buses and trucks in lines nearly a mile long, struggling up and down slopes. I didn’t clamber into my house until midnight.” Andrew was not alone in his lengthy quest to get home; many Atlantans share similar stories, with average commute times ranging from 4 to 10 hours. The next morning, roadways were still jammed with cars and trucks whose drivers and passengers still struggled to get to their destinations 16-plus hours later.

Some Pace students were not able to make it home before night fell. Senior Philip Werner and sophomore Sarah Werner drove for nine hours before pulling over and walking to a hotel, where they spent the night on the floor of the hotel lobby. “Although the situation was pretty horrible, I guess it could be worse. At least we were safe and fed, and that was more than some people,” said Sarah. Sophomore Matthew Plisko said, “HOME SWEET HOME!” after an 18-hour drive and a nap in a Kroger parking lot. These stories became commonplace during this complete shutdown of the city that resulted from a mere two inches of snowfall.

Hotels, motels, shelters, stores and churches filled with motorists who abandoned their cars, while good samaritans across the state brought hot cocoa, food and other supplies to people stranded in their cars on the impassable roads. Conditions became so severe that Gov. Nathan Deal issued a state of emergency, which freed up extra assets to aid with cleaning up the mess the storm left behind. 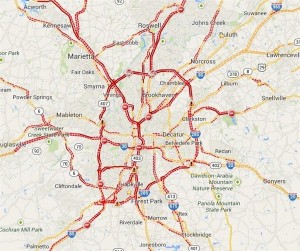 The traffic in Atlanta was so bad during the storm that most considered the highways to be more like parking lots.
Photo: Apple Maps

In the aftermath of the “Snowpocalypse,” freshman Jibril Sadiq said, “Georgia was definitely not prepared for these weather conditions this year, even after we had a similar experience three yeas ago. As weather changes over time, we need to be more prepared.” Jibril’s attitude was echoed by many all over Atlanta, as many public school students did not reach their homes at all, and were trapped in buses or gymnasiums at their school. Parents across the state were furious, struggling to understand why school districts didn’t cancel school earlier.

While senior Shabrea Duffy was upset by the danger the schools placed students in, she also made a positive observation about the Pace community: “I think we should do a better job in pre-planning for bad weather like this. Contemplating school with predicted bad weather, like snow, is not a smart gamble. However, it does make me feel good to know that the Pace community truly cared about its students safety. Many teachers, including those that don’t even teach me, as well as numerous students, constantly checked on me as I traveled home.” She explained how she was proud to call Pace her school because of this great outreach and support from faculty and students alike.

For all of the trouble with the winter weather, some still managed to find great happiness in the frozen landscape. Many kids enjoyed sledding, snowball fights, making snowmen and other snow-related activities.  Juniors Rebecca Husk, Maria Grenader and Caroline Denny all enjoyed different aspects of the Snowpocalypse. “I am loving it,” Rebecca said, “There is nothing more wonderfully peaceful than reading a favorite book and drinking hot tea with snow falling outside.” Maria wanted it “to last forever.” Caroline took an even more positive view of the unexpected storm, saying, “Snowpocalypse is the best thing ever, because all the snow comes at once!” Perhaps, if one looks at it the right way, there can be a good side to all of the difficulties experienced as a result of the snow.