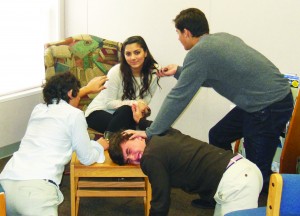 Jules has caught the eye of many potential suitors.
Photo: Max Greenberg

Hailing from the heart of Italy, the desirable senior Jules Zappone has spent the past four years taking names and breaking hearts. Her flirtatious and outgoing personality has given Jules the edge for being picked as this year’s Most Eligible Bachelorette. KN sat down with Jules for a few minutes to discuss her love life. She described her perfect date as “going to dinner at the zoo. There is nothing like watching the sunset next to the elephant exhibit. Then we would end the night with a dinner of Phineus and Ferb mac and cheese by the monkey cages,” she said. The boys will surely go bananas for that idea.

As for restaurants, Jules said that her favorite restaurant for a date is Houston’s. Jules has very specific qualifications in mind for her ideal guy: “I want my man to be anywhere between 5’10” and 6’2″. He must be exactly 175 pounds and ambidextrous; I like a man who can use both hands. I’m not gonna say that he has to have a six-pack, but it would be a good addition.” But these were not the only specifications. “I like a guy that can make me laugh; that’s a very important factor to me. I also would like him to dress well, not that he cares about his clothes a lot, but that he doesn’t look like a slob all of the time,” she said. As an athlete, Jules expects her ideal man to be sporty as well. “I don’t care what sport, but he has to play at least one every year,” she said.

When discussing her best qualities, she said, “Everybody tells me I have really good dimples. I am also great at winking.” Humbleness is one of her many attributes, as she refused to say anything more about herself.