How Well Do These Pace Couples Really Know Each Other? 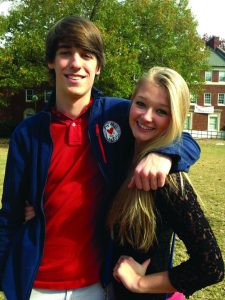 Carter and Kandace have been going strong for almost a year.
Photo: Kandace Thompson

KN: When did you first start dating?

CD: I just asked her. I was hanging out with her and asked her if she wanted to, uh, go out.

KT: We were in my living room watching a movie and we were talking about it. I was just like, “OK!” and he said, “OK, what?” And then he asked me out. It was a good moment.

KN: What was the first date?

CD: Oh, no… Hanging out at her house.

KT: Yeah, hanging out at my house.

KN: What would y’all’s ideal date be?

KN: What is Carter’s favorite movie?

KT: He does not have a favorite movie.

KN: What is Kandace’s favorite movie?

CD: Oh, didn’t we go over this? I thought it was “Harry Potter,” but Kandace cheated and told me it’s “How To Train Your Dragon.”

KT: “How To Train Your Dragon.”

KT: Either “The Office” or “Friends.”

KN: What is Carter’s favorite food?

KN: What is Carter’s favorite color?

KN: What does Carter like to do in his free time?

KN: What does Kandace like to do in her free time?

KN: What is Carter’s most embarrassing moment?

KT: He won’t get this one but it was when I was pantsed in front of Publix when I was in second grade in front of all my sister’s guy friends. It was so embarrassing.

KN: When did you first start dating?

MK: That’s kind of tricky. We were together in April but we didn’t make it official until July.

JP: Why was that?

MK: Because I went away for seven weeks and I didn’t want to have a relationship while I was in Europe.

JP: What was the other minor reason? Do you not remember it?

MK: Oh, yeah. He wanted to start a relationship on an odd day and I hate odd numbers. So I had to wait until we came back on an even day.

KN: Well, Jeremy, is there an exact date for all of this?

KN: How did Jeremy ask?

MK: Actually, he didn’t. I made a bet with him that he couldn’t remember my number, but I didn’t yet know he was a math genius and he remembered it and he sent me a text saying, “I win.” After that we made a “bubble bet.” So, if I blew the bigger bubble he had to kiss me. I won and he had to kiss me and that was at my house the first time we really hung out.

JP: It was rigged.

JP: What? Whoa, it has nothing to do with video games. The quoting movies, sure.

KN: What about Mackenzie’s ideal date?

JP: The light show at the Botanical Gardens.

MK: He already took me on it, the Botanical Gardens.

MK: I’m gonna use what he just wrote a college essay about: “Zombieland.”

JP: Not really anything specific.

MK: Hands down, “The Breakfast Club.”

MK: Well, he watched “Teen Wolf” last night so I’m going with that.

JP: What’s it called… I can’t remember what it’s called. Some red wedding thing. I just can’t think of the name. Some dungeons and dragons thing.

KN: What about Mackenzie’s?

JP: This chicken breast stuffed with cheese. I forgot the name of the cheese. Some, like, herb and stuffed cheese thing.

KN: What does Jeremy like to do in his free time?

MK: Mostly just hang out with friends. He hangs out with his best friend Dylan all the time.

KN: So he doesn’t hang out with you that much?

KN: What about Mackenzie, what does she like to do?