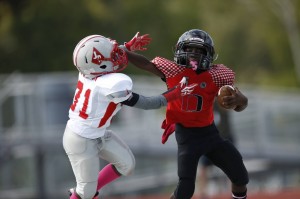 Recently, controversy has surrounded the NFL and Pee Wee football involving player safety. Injuries to the head, primarily concussions, have led to concern among parents about their children playing the sport. Amid this controversy, Esquire TV Network released a new show, “Friday Night Tykes,” on Jan. 14. The show follows five teams of eight to nine-year-old football players in San Antonio, Texas. The show is sure to receive criticism, especially with the recent concern for safety. The ten episode series will feature each team’s turbulent season involving insanely tough coaches and obsessive parents. Viewers will see kids pushed to their physical and mental limits. This extreme physical exertion leads to many tears for these young players. Menacing coaches freely spout phrases like “rip their heads off,” “make them cry” and “I don’t care if you are crying or in terrible pain, you need to keep working.”

Five teams are spotlighted in the show: the San Antonio Outlaws, Jr. Broncos, Judson Jr. Rockets, San Antonio Predators and the Northeast Colts. Each team is led by coaching staffs coming from a variety of backgrounds. From a former marine to ex-cons who want to help out the community, “Friday Night Tykes” has it all. According to the Esquire Network, the San Antonio Outlaws, “the bad boys of the league,” finished 2012 with a 9-2 record, coming in second place. They won the championship in 2011. The Jr. Broncos, a team that finished with a 2-6 record last year, is looking to rebound with a strong performance this year. Next, the Judson Jr. Rockets are poised for a championship run after last season’s third place finish with a 6-2 record. Judson, Texas is known to be a powerhouse football town with parents who love to win and often cause drama within the program. The San Antonio Predators seem to be on the rise after last year, squeaking into the playoffs with a 3-5 record and finishing in eighth place. Finally, the favorites for the championship, the Northeast Colts are ready to continue their dominance over Texas youth football after last season’s 11-1 record and first place finish. The Colts have been known to have the loudest and most obnoxious fans in all of TYFA.
According to a USA Today Sports article, USA Football spokesman Steve Alic said, “Youth coaches by nature are role models, and the language and the scenes in Esquire Network’s ‘Friday Night Tykes’ are in sharp contrast to USA Football’s core beliefs and what is taking place on the majority of youth football fields across the country.”