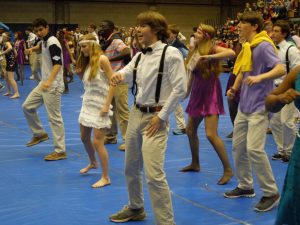 With the fierce cross-grade competition, does Spirit Week bring the Academy together or split us apart?
Photo: Lee Wilson

The image of the first week after winter break burned into the minds of Pace students does not resemble the typical boring return to school; Spirit Week festivities bring competition and excitement to what would ordinarily be one of the dreariest times of the year. While these activities may encourage grade collaboration, they also cause fierce rivalries between the grades. At the core, Spirit Week seems to not actually encourage school “spirit” but rather acts as a distraction from the beginning of the long second semester.

The best example of this conflict between grades tearing the Academy apart, especially this year, appears during the selection of music for skits by each grade. The upperclassmen have priority with song selections, resulting in the seniors believing that they have complete control over all the other grades. This provokes anger and fury among the other grades, who work as hard as the seniors to put together their dances. Forcing the other grades to re-choreograph dances unnecessarily not only causes the seniors to appear  greedy and malicious, but also puts the other grades in a precarious position. Teaching new dances to members of a grade has never been an easy task, and changing songs just makes it even worse.

Though the dance seems to cause the most issues, there are a variety of smaller conflicts that encourage rudeness and avarice. For example, certain members of various grades refused to exchange measurements with each other since “each class is for itself.” From a school known for its strong sense of community, this small act breaks the essence of Pace at the core.

In addition, the actions of the leaders of each grade prove to cause conflict within the classes. Students do not want leaders to talk down to them as if they are children; they want to be respected. The lack of respect from leadership, fierce competition, and surplus of drama can result in social distress and, ultimately, a lackluster Spirit Week that brings more hatred than fun to the Academy.