Mixing the Magic: The Music of Spirit Week 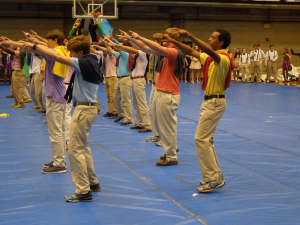 Spirit Week relies on the work of many people to become the great success that Pace students expect and look forward to. Though everyone can easily see the efforts of the visual and performing artists, very few know the challenge of putting together the music mix for both the morning and afternoon dances. People who mix the music must work with both choreographers and the Student Council to select their songs before even starting on the track, which is demanding in itself.

The process for selecting songs begins when students choreographing the dance talk to the mixer. The choreographers usually choose songs that they think will work well for a dance, while also considering their relevance to the theme. At this point, the mixer will send the list of songs to be used to the Student Council. Since grades aren’t allowed to use the same songs, Student Council representatives communicate with each other to eliminate any duplicates before choreography begins. After the song list is approved, the mixer can get to work on the track itself.

Many mixers use GarageBand or Audacity. Although cutting parts of songs may sound easy, it is quite difficult to select the best region of a song. There needs to be a correct balance of verse and chorus, and explicit language must be removed. After the regions of the songs are selected, transitions are added. Though a simple fade out may be the easiest way to transition, some mixers challenge themselves to use creative ways of flowing from one song to the next. The quality of the transitions oftentimes determines the quality of the entire mix, so mixers are under a lot of pressure to get it done quickly and beautifully. After the song is finished, the mixer is also responsible for exporting the song and delivering it to choreographers as well as other key people in the grade. Then, their job is finished, and everyone can enjoy the music and dance along.