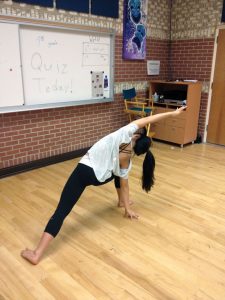 For students looking for a way to relieve the stresses of life, look no further than the Yoga Club. The club, which was founded by seniors Scarlett Chang, Alexandra McCorkle and Morgan Brewton-Johnson, meets once a week for an hour in the middle school dance room. The leaders founded the club because they all loved yoga, and because they wanted to help students at Pace and people all around the world. “We made the club because yoga was really important to all of us and we also wanted a unique way to fundraise for Kiva,” said Morgan. Through five dollar donations from yoga class participants, the club contributes through Kiva to loans for business owners in developing countries who are trying to make a difference in the world.

After going to a session, I was very pleasantly surprised with the club. Classes are led by Scarlett, who became a certified yoga instructor this summer. “Last year I participated in a 200-hour yoga certification course. After practicing for three or so years, I wanted to immerse and deepen my practice, because there are so many facets of yoga that many people don’t realize,” said Scarlett.

Despite her relative lack of experience as a yoga instructor, Scarlett seemed like a seasoned veteran as she led the group through her routine. She mixed up new poses to prevent the session from becoming repetitive, and she also perfectly mixed difficult poses with relaxing breaks. Very upbeat music played in the background as we practiced yoga, and it really helped everyone grind through the tough segments of the session.

“I love the blood pumping music; it pumps me up through the tough stretches,” said senior Jacob St. Amand. Although most people think of yoga as easy and relaxing meditation, for the duration of the session many attendees, including myself, had trouble holding some of the poses. After the hour-long session a lot of the members felt exhausted but relaxed at the same time.

The club is very inclusive with everyone welcome to attend, even if you are a beginner like I was. “The club is really chill, anyone can come no matter how bad they are. I love it,” said senior Anna Luetters. The club isn’t only for girls. Guys often come and enjoy the solid exercise. “I come out to the Yoga Club every time, and I love it because it keeps me toned,” said senior Nathan England. The club has had a good turnout for its weekly classes, but the club leaders would like to see more people show up, especially more underclassmen.