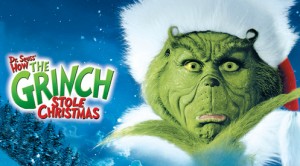 Both the original 1966 Dr. Suess’s How the Grinch Stole Christmas and the 2002 edition are holiday must sees for Pace students.
Photo: Universal Studios

Christmas spirit can be experienced in many ways, including putting up decorations, baking and consuming holiday treats, and watching holiday movies. When asked about holiday movies, Pace teachers and students responded with a wide variety of favorites. From movies made in the 1940s to the late 2000s, the Pace community is fond of them all. Here are some favorites, in no particular order:

1. “It’s a Wonderful Life,” directed by Frank Capra and released in 1946, is one of the most classic and loved movies of all time. Actor James Stewart plays George Bailey, a man who is not satisfied with the way his life is going and contemplates ending it entirely, until a guardian angel appears to show him a brighter side. His angel arrives on Christmas Eve to take him back in time and show him all of the people he has helped and to make him feel better about himself.

2. “Elf” is a comical Christmas movie about Buddy the elf. Played by Will Ferrell, Buddy lives at the North Pole but is not actually an elf. Buddy was brought home to Santa’s workshop from an orphanage in New York City. Growing up, he was very out of place as he was at least twice the size of a normal elf. One day, Santa tells Buddy of his true identity and that his father lives and works in New York City. This news sparks Buddy’s trip to New York where he finds Walter Hobbs, his father. Buddy’s adventure begins when he attempts to build the relationship he and his father never had as well as explore the Big Apple.

3. “How the Grinch Stole Christmas” is a Christmas must-see, whether it’s the 1966 animated film or the 2000 live-action edition starring Jim Carrey. The movies star a rotten man, the Grinch, who hates Christmas. He lives the life of an outcast on a mountain above the town of Whoville whose inhabitants are full of Christmas spirit. The Grinch is feared by the townspeople, but after meeting a young girl named Cindy Loo Who, the Grinch begins to look at Christmas in a new light.

4. “Rudolph the Red-Nosed Reindeer” is an animated movie about a reindeer that is different from all of the other reindeer, ridiculed for having a bright red nose. Rudolph is an outcast among his peers at school. Not only is his nose red, but it glows. On one foggy night before Christmas, Santa realizes that with the storm he cannot bring presents to the children. Santa calls upon Rudolph to help guide the sleigh through the night. Rudolph’s red shiny nose is no longer seen as a flaw, but as the light that saved Christmas.

5. “Eloise at Christmastime” is an animated movie about the life of a young girl, Eloise. Eloise lives in a grand hotel along with her grandmother. Eloise’s favorite holiday is Christmas and makes sure that everyone else in the hotel knows. Not only does she decorate her apartment, but decorates parts of the hotel as well. Eloise knows the employees best of all and loves to tell them whatever is on her mind.  Eloise is sure to bring Christmas spirit to viewers.

6. “National Lampoon’s Christmas Vacation” is the third of the National Lampoon’s vacation movies starring Chevy Chase. All that the Griswold family wants is to have a wholesome and traditional family Christmas, but a few things go awry. Not only does the family go out into the wilderness to cut down their own tree, but they put over 25,000 Christmas lights on their house. All of the family’s relatives come to visit for the holiday, but not everything goes as planned. Clark Griswold’s wife’s cousin Eddie surprises the family and brings trouble with him. The night before Christmas, the family’s dinner is spoiled by a rotten turkey as well as a squirrel invasion that destroys the family house. This flick is not your average Christmas movie, but it’s definitely entertaining.

7. “Home Alone” is the first of a four-movie series and is regarded by many as the best of the bunch. The flick stars Macaulay Culkin as a young boy who finds himself ignored in a large family. The family is going on a vacation to Paris for Christmas. Not only does he wish that his family never existed after a fight, but the day the family leaves for vacation, Kevin is accidentally left behind and his wish comes true. However, things are not as they seem and Kevin must defend himself against robbers until his family returns.