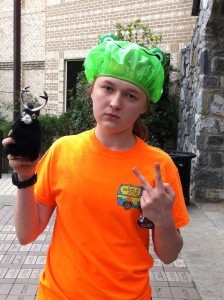 KN: So you’re probably known mostly around Pace for your  freestyling abilities. Could you elaborate on that?

CP: I was kinda bored. I mean, I know it’s been pretty rough and I know I’m pretty bad at it, but at least I don’t mess up by snapping and clapping… like [senior] Sam [Downey].

CP: Yeah, he got me. I’ll get him. Maybe not with freestyle, but I’m taking karate so maybe with that.

CP: [Sophomore] Frances Crisler flicks me a lot, so, I’ll show her one day, she won’t even know.

KN: So, what’s your inspiration for your free styling?

KN: Why do you love Miley?

CP: I mean, look at her. She can twerk, which I’m a fan of. I cannot personally twerk.

KN: Do you wish you could twerk?

CP: It’s a talent, it’s a given talent. She is pretty good. I like boys, too. Boys, that’s what inspires me. I guess men, not boys. I like boys.

KN: Are you disappointed, or are you a fan of Miley’s transformation from Hannah Montana to what she is today?

CP: I like Miley Cyrus. I like Hannah Montana. I like it all. I mean, Billy Ray might not, but I’m a fan. I’m like, ‘Miley keep on, hold strong. It’s the climb, she gotta do it.’ Gotta do what you gotta do.

KN: Besides free styling, what else do you do at Pace?

CP: I did cross country, but I was mainly just there. I can’t run fast, I’m like a turtle. If it was a rabbit versus a turtle, I could get home fast ’cause I could get in my shell. But I can’t run 3.5 miles fast. I’m the one who says, ‘I’ll hand out the drinks at the end, you guys go run.’

KN: So, if you could be any animal, would it be a turtle or something else?

CP: Probably a pegasus, but a pegasus with a horn. I know those don’t exist, but just believe. So, I guess a pegasus-unicorn. I wanna be able to fly off into the sunset with my pegasus, but I also want to be able to tell people that I have a unicorn. So, it’s kind of a lose-lose.

KN: [Laughs] What’s it like having a brother, senior Jake Pokalsky, at Pace?

CP: Well, right now I’m mad at him cause he lost my frickin’ swim cap shaped like a frog and he also lost my Little Pony horse. I found the swim cap in the parking lot. I mean, we’re homies. Sometimes he’ll be like, ‘Hey,’ and I’ll be like, ‘Hey, Jake.’

KN: So, would you say you have a good relationship with Jake?

CP: Like I said, sometimes we can speak sentences to each other, other times it’s just slang. But you know what, I will take what I can get.