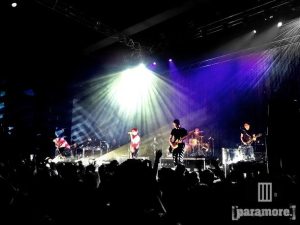 Paramore brings their A-game at every concert.
Photo: http://www.paramore.net

Edgy, innovative and original are just a few of the words that come to mind when the band Paramore is brought up in conversation. Paramore is an alternative band that originated in 2004 out of Franklin, Tenn. The musical group is centered around their lead singer, Hayley Williams, followed by a main guitarist and bassist. The band plays alternative music with a bit of edgy rock that can appeal to people who like all genres of music.

Over the Thanksgiving holiday, Paramore performed at the Gwinnett Center Arena, one of their many concerts held in the Atlanta area. Paramore performed many of their songs that have hit the charts such as “You Are the Only Exception” and their newest single, “Still Into You.” They played a mix of their older and new songs, which made the fans go wild. Paramore, unlike other bands, does not just play their newest albums or the same songs at every concert, but they keep things fresh. Hayley Williams is very in touch with the audience and embraces her fans. The Gwinnett Arena is the perfect atmosphere for Paramore’s rowdy and rambunctious crowd that came out to see them live.

Ms. Williams is the youngest of the bunch. She became the lead singer when she was just 16 years old and has always been serious about her music as well as the work the band does together. The other members of the band have differed over the past seven years, but Ms. Williams has never had any doubts about whether she was fit to be the lead singer of the band. The three members of Paramore now work very well together because they are all friends. The friendship is obvious when they perform because they are so into the music and connect well with their band members. Paramore brings more to the stage than the average artist because of their connection with the fans as well as the friendship they all share. It is obvious that they are having fun onstage and want to ensure that everyone has a great night.