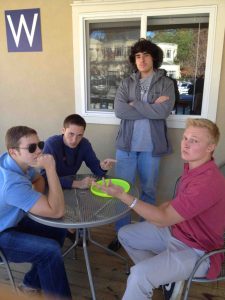 For students looking for a chill ambiance in which to play frisbee, look no further than Pace’s Ultimate Frisbee club. The club was started by seniors Jake Pokalsky and Jacob St. Amand. They wanted to get the club up and going because they believed it offered them and other Pace students who only play spring sports a chance to stay active and fit while having fun. “We all wanted to create a really chill place where we can rip disk and get swole in the process,” said Jake.

Club members are content with the way things have gone so far this year, but Jake says they are hoping to make the club more “legit.” Although they have had a good turnout at their scrimmages, the club leaders hope that more members will show up on Fridays when they play. “We definitely need some more people to come out,” said Jacob, “It makes it more fun when more people are playing and it makes it even more chill.” The club also has plans to create their own T-shirts and possibly their own frisbees to give out to every member.

Ultimate Frisbee has been expanding rapidly among private schools in Atlanta, and club leaders hope that the Pace club can grow and eventually compete with other private schools. “One of my personal goals is to get the club good enough to beat a really good school like Woodward,” said Jacob, “If we can eventually reach that goal, I think we will all be happy.” The club has not scheduled any games against other schools yet, but club leaders plan on doing so once they get a larger turnout and practice more. Club member and senior Hunter Cessinger believes that with enough practice the team can beat Paideia, one of the best ultimate frisbee teams in the state. “I think we have a lot of potential to beat some really good teams like Paideia, mainly because we have more swagger, and that’s the biggest factor in Ultimate Frisbee,” he said.