Roboknights Gear Up for Success 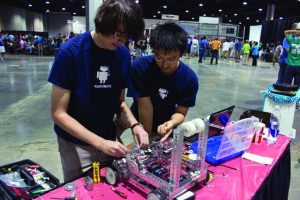 The Roboknights (Jonathan Spalten and Andrew Wu) participated in GRITS on Oct. 5.

Getting a robot to hang from a bar that is two and a half feet off the ground is no small feat. Nevertheless, Pace’s robotics team, the Roboknights, is determined to do just that. The Roboknights, composed of sophomore Rohan Malik, junior Jonathan Spalten and sophomore Andrew Wu, compete against other state and national robotics teams in the First Robotics Challenge, the premier national competition.

Some students may have dabbled in robotics in Middle School as an elective; however, Roboknights is a step up from the Lego robotics team in the Middle School, with challenges requiring the use of metal parts and non-Lego motors. The tasks for competitions change annually and can vary wildly. The Roboknights take the robot that they have worked on throughout the entire season and use it to compete in the annual challenge. There are three stages of each challenge: an autonomous round, a driver controlled round, and a thirty-second endgame where there are specific challenges. “Last year’s challenge was one in which a robot would have to take a ring and hang it on a vertical tick-tack-toe board to score points,” said Jonathan, “In autonomous, there was an infrared beacon placed under one particular column. If your robot could detect [the column] and place a ring on it, you would be awarded points. In the endgame, one of the challenges was to get one robot on top of another.” While having to watch the product of a year’s worth of effort perform in a competition can be stressful, “competitions are normally a pretty fun experience. You are there with normally ten or so teams, and you are able to see how your bot performs against others,” said Rohan.

Each member plays an integral role in the team. Andrew usually programs, “since I think more logically,” he said. “I enjoy programming the most because you pretty much start with a blank document that you add code to,” said Rohan. “Every line of code that you add is something that is then carried out by the bot. Lines of code that you write are translated into movement or plenty of other functionalities.” With two programmers, Jonathan takes on the task of building. “It allows for the creation of a complete design from just a single idea. Often, the idea is flawed and the robot reflects that, but half the challenge is to correct those bugs in the idea through the idea’s physical manifestation: namely, the robot,” he said.

With the senior members of the team having graduated, the Roboknights are in a time of transition. “With the addition of an additional competition at the super-regional level, our chances of getting to state have diminished, and while it is still difficult to advance from the qualifier round, we definitely hope to improve our position from last year,” said Andrew.