NFC Playoffs May Include Some Surprises 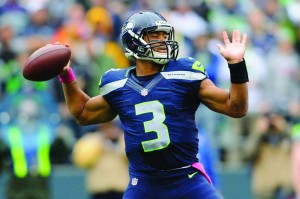 Russell Wilson could lead the Seahawks deep into the playoffs.
Photo: http://www.totalprosports.com/wp-content/uploads/2013/04/12-russell-wilson-seattle-seahawks-biggest-nfl-draft-steals.jpg

As we enter the second half of the NFL season, one question is on the minds of football fans: which teams are going to make the playoffs? This year has been a shock to many, as most of the powerhouse NFL teams are lagging and those teams that have a history of under achievement are Super Bowl contenders. Here are the teams projected to make the playoffs in the NFC:

1. Seattle Seahawks – Right now, the Seahawks look like they have all of the tools to bring the Lombardi trophy back to Seattle. The Seahawks defense is ranked 2nd in passing yards allowed and 6th in rushing yards allowed, making it one of the best defenses in the league. The offense, led by running back Marshawn Lynch and quarterback Russell Wilson, ranked 2nd in the NFL in rushing yards, but rank a mere 25th in passing offense – a worrysome statistic. Despite the Seahawks apparently lacking a passing game, overall the Seahawks are bound to be a favorite to win the Super Bowl and will easily make the playoffs.

2. San Fransisco 49ers – Being in the same division as the Seahawks, they will have to win the Wild Card to get into the playoffs. However, the 49ers are one of the best teams in the NFC and deserve a playoff berth. Last year the team relied on a very stout defense which has taken a slight step backwards this year. They still rank 6th in opposing pass yards, but have fallen short in rushing yards allowed, with a mediocre ranking of 18th. This dramatic change likely is due to the loss of linebacker/defensive end Aldon Smith, who is in rehab for drug addiction. The run-heavy offense is headed by quarterback Colin Kaepernick, who makes up for his low number of passing yards with his 240 yards of rushing, which ranks 4th among quarterbacks.

3. New Orleans Saints – The Saints look to bounce back this year now that the one-year suspension of head coach Sean Payton has ended. Leading the NFC South by two games already, the Saints seemed poised to lock a playoff spot. The defense has made vast improvement from last year, when they were statistically the worst team in NFL history. Now, they rank 9th in passing yards allowed and 22nd in rushing yards allowed. The main weapon of this team is their passing game, which is led by future hall of famer quarterback Drew Brees. Brees averages a whopping 311 yards per game, which ranks 2nd best in the league. The rushing game is split between running backs Pierre Thomas, Khiry Robinson and Darren Sproles. Overall the core has done OK, averaging 86 yards per game, but it’s hardly needed with Brees at the helm.

4. Green Bay Packers – The Cheese Heads are at 4-3 and at the top of the NFC North right now with both the Bears and the Lions at their heels. The defense, led by linebacker A.J. Hawk and injured Clay Matthews, average only 79 rushing yards allowed per game this year, which ranks 3rd in the NFL. Their pass defense, however, has let up an average of 267 yards per game, which ranks 24th in the league. The Packer offense can only be described as spectacular. Star quarterback Aaron Rodgers is averaging 300 yards passing and a touchdown every game. The offense has also been helped by the addition of running back Eddie Lacy. The rookie out of Alabama is currently averaging 4.2 yards per carry on 83 attempts, allowing the Packers to have a more balanced attack.

5. Dallas Cowboys – The Cowboys will make the playoffs based on what can best be described as a cheat code, since the rest of their division is riddled with injuries and poor coaching. The Cowboys defense has been lackluster so far, allowing 291 passing yards per game which is 3rd worst in the league. They have not done much better stopping the run, since opposing teams have been able to gain an average of 102 yards per game. The main weapon of the Cowboy offense is quarterback Tony Romo, who has accumulated 2,010 passing yards this season, which was largely helped by his 509-yard and five-TD performance against the Broncos. The rushing game has been hurt by the injury of starting running back DeMarco Murray, but he should be back soon.

6. Detroit Lions – The Lions have gotten off to a slow start this season, but still are one of the best teams in the NFC. The defense will have to tighten up, as it allows an average of 282 yards passing and 115 yards rushing per game. Quarterback Matt Stafford has finally come into his own, averaging 294 yards per game, which ranks 5th in the NFL. Running back Reggie Bush has been taking most of the carries for the Lions, and averages 4.3 yards per attempts on 98 carries. Bush is also an integral part of the underneath passing game and Bush combined with Calvin “Megatron” Johnson provides a deadly attack.

Tune in next month for my AFC predictions.