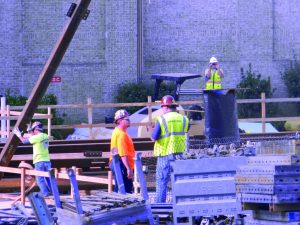 Construction workers will be hard at work until the Arthur M. Blank Upper School is complete.
Photo: Fred Assaf

From last year’s capital campaign, “Aim High,” to this year’s Fall Fair theme, “Raise the Roof,” Pace families and faculty members have displayed extraordinary excitement and support for the construction of the Arthur M. Blank Family Upper School, and the buildup of energy and emotion surrounding the progress of the new building shows no signs of slowing down.

Officially, construction began on Apr. 24, as crews moved in behind the Assafs’ house to clear and terraform the landscape, but several important events marked the evolution of Pace’s original academic building. Students said goodbye to the building by decorating the hallways, classrooms and everything else in vibrant colors of paint, an event sponsored by the Student Council, while alumni, faculty, and other adults left their mark by participating in the “Hoedown Before the Teardown” and writing their favorite memories on white posters all around the building. The groundbreaking ceremony took place at the end of the school year, and soon after, demolition began.

The destruction of the old building was a sight to behold. Powerful vehicles slowly tore down each of the three structures that made up the old academic building one by one, then the debris was removed to allow for work to start on the foundation. In September, the foundation was completed and progress began on the vertical construction of the building.

Though the rapid placement of beams and floors may be the most noticeable change since the demolition of the old building, one of the greatest challenges of the entire project was actually completed during the summer, when the entire site looked like a gigantic mud pit. Since the construction required disturbing the land underneath the Castle’s foundation, crews had to closely monitor the Castle itself, shoring up the historic landmark to preserve it and prevent it from moving. Yet, this is not the only unseen challenge that workers have completed, as the seemingly normal faculty parking lot actually contains a massive amount of engineering beneath it, built to aid in storm water management as well as fire safety systems. According to Pace parent and University Development Services President Bob Mills, “The two underground structures will hold a combined 100,000 gallons of water and are up to 11.5 feet deep—think of an underground swimming pool!”

In the coming days, the frame of the building will be completed and various utilities, such as water, electricity, etc., will be installed. Because the construction began early enough, the building is on schedule for completion by the 2014-2015 school year.