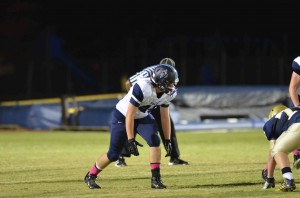 Sophomore linebacker Kyle Orr gets ready to rush the quarterback in the 17-14 loss to Landmark Christian Academy.
Photo: Fred Assaf

The Knights suffered two letdown losses in the past two weeks, severely hurting their playoff chances and leading to heartbreak for the entire team. The first was a matchup against #2-ranked Landmark Christian Academy at Landmark on Oct. 18. Even after a bad snap on the Landmark 1-yard line led to a 99-yard fumble return for a touchdown for the War Eagles, the Knights outplayed their opponent for much of the game, pulling ahead 14-10 after a second touchdown pass from junior quarterback Kevin Johnson to senior Kameron Uter, a newly minted commit to Vanderbilt.

However, with five minutes left in the game, Landmark drove 55 yards and scored the go-ahead touchdown with 40 seconds left to take the lead. A last-ditch effort by the Knights to tie the game came up short, and the Knights suffered a tough 17-14 loss. Kevin passed for 237 yards and two touchdowns in the loss, while sophomore Malik Staples led in rushing with 41 yards. Kameron racked up 107 yards receiving and two touchdowns. A win against Landmark would have virtually guaranteed a playoff spot for the Knights, but they would have to look to bounce back versus Holy Innocents’.

Playing Holy Innocents’ at home last Friday came with many implications, with playoff position and bragging rights on the line. Despite not playing their best football, the Knights hung in the game, down 7-0 with a little under a minute left in the first half when Kevin scrambled around and threw a 50-yard bomb to senior Denzel Franklin, leaping in the end zone to tie the game at 7-7. While the game stayed tied into the fourth quarter, tensions heightened as both teams anticipated a close finish.

The Golden Bears went up 14-7 on a running touchdown by running back Clay Pfohl. However, the Knights got the ball back with 5:30 left on the clock. Kevin led a balanced attack down the field, meticulously picking apart the Holy Innocents’ defense. This culminated in a QB sneak over the middle by Kevin for a touchdown to tie the game with a little under two minutes left in the game. Fans for both teams seemed to anticipate overtime. However, HIES quarterback Luke Wright led the rushing attack down the field, and even though it seemed like the Bears just wanted to go to OT, they found themselves nearing field goal range. With the help of a 15-yard face mask penalty on the Knights, the Bears’ junior kicker Walker Thomas, a soccer player moonlighting as a kicker, lined up a 41-yard field goal to decide the game. As everyone held their breath, Thomas calmly stepped up and nailed the kick, shattering the Knights’ hopes and dreams.

The final score was 17-14, another heartbreaking loss with the same score as the Landmark game. Kevin passed for 142 yards and a touchdown in the loss, while Malik led with 72 yards rushing. Kameron and Denzel combined for 124 yards receiving and one touchdown.

The Knights will try to salvage their postseason hopes next week when they travel to take on #1-ranked Eagles Landing Christian Academy. If you can’t make it to the game, make sure to check it out on Knightflix!